I Stand With Brett Kavanaugh 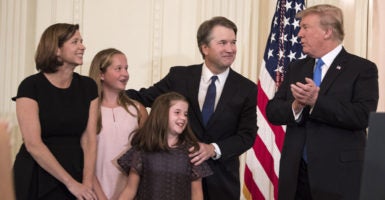 President Donald Trump talks to Brett Kavanaugh, joined by his family, including his wife Ashley and his daughters Margaret and Elizabeth, during a introduction ceremony at the White House on July 9. (Photo: Kevin Dietsch/UPI/Newscom)

When I read Christine Blasey Ford’s account of being assaulted when she was a teenager, I felt sick to my stomach.

How could you not after reading how she was trapped in a room and pinned down as a boy groped her and tried to rip her clothes off? This is a serious allegation.

Ford should be treated with respect, and she deserves an opportunity to share her story.

She is not, however, entitled to blind faith that everything she says is true. Judge Brett Kavanaugh also deserves to be heard and should be treated with the same level of respect.

But that’s not what we’re seeing.

Without actually hearing from Ford, some Senate Democrats—who coincidentally already announced their opposition to Kavanaugh’s confirmation (some even before the nomination occurred)—have made up their minds about what happened.

Senate Judiciary Committee Chairman Chuck Grassley, R-Iowa, invited Kavanaugh and Ford to testify next Monday. Kavanaugh accepted, but now Ford is refusing to appear before the committee until the FBI conducts an investigation.

But what exactly would the FBI investigate? Ford says she does not remember when or where this incident occurred, and two of the other individuals that she says were present deny being there or ever seeing Kavanaugh behave in such a manner.

Further, the FBI’s role in judicial confirmations is to gather information for the Senate to consider, not to make credibility assessments or independently investigate incidents that would have been handled by local authorities. And the FBI has already conducted six background checks throughout Kavanaugh’s 25-year career in public service—none of which uncovered any misconduct.

What’s more, unlike so many other allegations where there was a clear pattern of abuse with dozens of women coming forward (just remember Hollywood producer Harvey Weinstein, TV news host Matt Lauer, and former Judge Alex Kozinski, to name a few), Ford’s account stands in stark contrast with the words of other women who have known Kavanaugh for decades. A group of 65 women who knew Kavanaugh in high school say he “always treated women with decency and respect.”

This allegation, further, can’t be squared with the Kavanaugh the American people have come to know this summer. He’s a man who has been a champion for women throughout his career. He’s affectionately known as Coach K by the dozens of girls he’s coached on basketball teams; he quietly lives out his faith by serving the least fortunate in his community; and he has worked to identify and promote talented women.

At his confirmation hearing, Kavanaugh said, “There’s a pipeline problem [for women in the legal profession] … I’m very focused on making sure women are getting the same opportunities as men.”

What I’m left with is the sinking feeling that the Democrats have used this accusation, without regard for Ford or the #MeToo movement, as simply a callous and calculated part of their plan to defeat Kavanaugh’s confirmation.

The timing is too convenient; the tactics too obvious. Had Sen. Dianne Feinstein, D-Calif., shared this information with Grassley six weeks ago when she received it, the committee could have conducted an investigation while allowing Ford to retain her privacy and Kavanaugh to protect his reputation. After all, allegations of sexual assault should not be manipulated for political theater.

But that is precisely what happened. Indeed, Sen. Mazie Hirono, D-Hawaii, tipped her hand, admitting the Democrats want to keep this Supreme Court seat vacant until after the 2020 presidential election.

And the Democrats on the Senate Judiciary Committee keep moving the goalposts: First, Feinstein withheld this allegation from the Senate Judiciary Committee for six weeks. Then Democrats argued for delaying the committee vote based on unreleased allegations. When the allegations were made public, Grassley delayed the vote and began investigating Ford’s account, but Feinstein refused to participate.

Grassley has handled these claims with the dignity and respect that both individuals deserve. As such, the committee should move forward. Ford has an opportunity to share her story next Monday. She’s had over six weeks with the guidance of counsel to prepare for this hearing. Perhaps she will decide to appear, but, if she does not, there is no need to delay further.

Hopefully the American people will see the Democrats’ tactics for what they are: just another in a series of attempts to defeat Kavanaugh’s confirmation, and failing that, to delegitimize him and forever stain his reputation.

For far too long, those who suffered at the hands of sexual abusers were afraid to come forward. The #MeToo movement started a national dialogue that cannot be ignored.

Allegations of sexual assault must be taken seriously, and all parties involved should be treated with respect: those making accusations should be heard and those accused of assault should be presumed innocent until proven guilty.

But it will be the #MeToo movement’s undoing if assault allegations are weaponized to advance a political agenda rather than to protect those who have been victimized.

>>> Listen to “SCOTUS 101,” podcast with Elizabeth Slattery and friends bringing you up to speed on what’s happening at the Supreme Court.