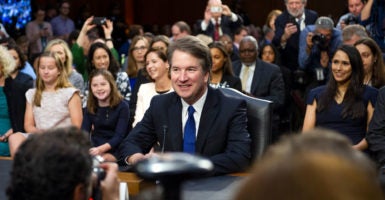 “No one is above the law in our constitutional system," says Supreme Court nominee Brett Kavanaugh. (Photo: Ron Sachs/picture alliance / Consolidated/Newscom)

Obstruction and absurdity were hallmarks of the first day—with Democrats demanding a delay, more than 60 protesters being arrested, conspiracy theories that a White House staffer and former law clerk sitting behind Kavanaugh was flashing a “white power” sign, and the left attacking liberal Supreme Court litigator Lisa Blatt for introducing Kavanaugh.

By comparison, Day Two was relatively calm. Here are some of the highlights.

As questions for Kavanaugh got underway, Democrats started pressing for his views on issues that could come before him in the future on the Supreme Court.

Kavanaugh declined to provide those views, explaining that he had to be an “independent nominee” as well as an “independent judge.” To that end, he looked to what he called “nominee precedent.” That is, he had examined previous Supreme Court confirmation hearings to consider how nominees had approached requests of this kind in the past.

He found a consistent pattern of declining to give what Justice Ruth Bader Ginsburg described in her 1993 hearing as offering “no forecasts, no hints … no previews.” Nominees have taken that position since Felix Frankfurter, nominated by President Franklin D. Roosevelt, appeared before the Judiciary Committee in 1939.

In fact, during his confirmation hearing in 1986, Justice Antonin Scalia refused to say whether Marbury v. Madison—which established the concept of “judicial review”—was right or wrong.

In addition to this “nominee precedent,” Kavanaugh explained that the hearing itself is “a moment of judicial independence,” in which he had to preserve his own independence as both a sitting appeals court judge and, possibly, a future Supreme Court Justice.

Kavanaugh responded, “I don’t live in a bubble. I live in the real world … I understand the importance of the precedent set forth in Roe v. Wade.”

Feinstein pressed Kavanaugh to explain his recent statements that the Roe v. Wade decision is “settled.” Roe v. Wade, Kavanaugh said, is “settled as a precedent of the Supreme Court and entitled to respect under the principles of stare decisis.”

Kavanaugh is one of a group of U.S. Court of Appeals judges who co-authored a legal treatise titled “The Law of Judicial Precedent.” He explained some of the “principles of stare decisis” that the Supreme Court considers when evaluating its own past decisions: the age of the decision, how much people have come to rely on it, and whether it has been reaffirmed over the years, among others.

Kavanaugh’s answer echoes the language of previous Supreme Court nominees. In 2009, for example, Justice Sonia Sotomayor was asked about the Supreme Court’s 2005 decision in Kelo v. City of New London. She said that, as a Supreme Court justice, she would give Kelo “the deference that the doctrine of stare decisis would suggest.”

Several senators asked Kavanaugh about his views of executive power and limits on the president. Kavanaugh declared, “No one is above the law in our constitutional system.”

Feinstein brought up the Supreme Court’s ruling in United States v. Nixon (1974), mandating President Richard Nixon to turn over potentially incriminating tapes related to the Watergate scandal, and asked whether this means a sitting president could be required to respond to a subpoena.

Kavanaugh called the Nixon case one of the “four greatest moments in Supreme Court history” because the justices stood up for judicial independence “in a moment of crisis.”

Sen. Chris Coons, D-Del., asked about the president’s ability to fire a special prosecutor, but Kavanaugh declined to answer Feinstein’s and Coons’ questions about hypothetical cases that could come before him.

Kavanaugh had previously written in a 2009 law review article that Congress should consider enacting a law that would protect a sitting president from criminal investigation, indictment, or prosecution while in office.

He explained, “The indictment and trial of a sitting president … would cripple the federal government, rendering it unable to function with credibility in either the international or domestic arenas. Such an outcome would ill serve the public interest, especially in times of financial or national security crisis.”

Sen. Orrin Hatch, R-Utah, gave Kavanaugh an opportunity to discuss something he’s particularly proud of: his efforts to advance women in the law.

“There’s a pipeline problem,” he remarked, “[so] I hire the best and the best includes women.” A clerkship could help launch the “next generation of leaders.” He concluded: “I’m very focused on making sure women are getting the same opportunities as men.” Indeed, his female law clerks have gone on to become law professors, prosecutors, and  attorneys at top law firms and in government.

Hatch also asked Kavanaugh about his relationship with former 9th Circuit Judge Alex Kozinski, who resigned amid allegations that he sexually harassed several female law clerks. Kavanaugh clerked for Kozinski in 1991-1992 and worked with him over the years on projects such as co-authoring the legal treatise “The Law of Judicial Precedent” and helping Justice Anthony Kennedy select his law clerks.

Kavanaugh acknowledged that they did not see each other often (he lives in Washington and Kozinski lives in Pasadena, California), but hearing the allegations was “a gut punch.” Kavanaugh continued, “I was shocked and disappointed, angry … No women should be subjected to sexual harassment in the workplace.”

He applauded Chief Justice John Roberts for convening a committee of judges to come up with a better system of addressing these issues within the federal judiciary.

Meanwhile, on the Senate floor, Minority Leader Charles Schumer, D-N.Y., tried to employ a different tactic to obstruct the hearing.

The Senate has an unusual scheduling rule that creates an opportunity to disrupt committee proceedings. Senate Rule 26 requires that the full Senate must give permission for individual committees to meet after the Senate has been in session for two hours or past 2 p.m. While consent is routinely given, a single senator refusing to cooperate can force committees to stop meeting.

Today, the Senate came into session at noon and, shortly before the 2 p.m. deadline, Schumer objected to the Judiciary Committee continuing its hearing on the Kavanaugh nomination. Majority Leader Mitch McConnell, R-Ky., ensured that the hearing could continue by adjourning the Senate instead.

Day Three will include more rounds of questions from the senators. Later this week, outside witnesses such as representatives from the American Bar Association, former law clerks, law professors, and many others will testify before the committee—making the case for or against Kavanaugh’s confirmation.

Despite the rocky start on Day One, Day Two of Kavanaugh’s hearing was mostly like any other Supreme Court confirmation hearing.