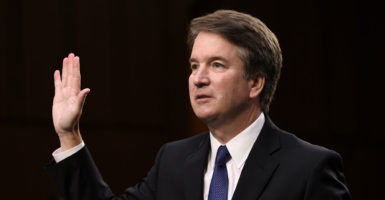 The Senate Judiciary Committee kicked off its hearing for Supreme Court nominee Brett Kavanaugh today, and it was no peaceful outing.

The first day of a confirmation hearing is usually placid, with committee members and the nominee offering fairly predictable opening statements before the nominee begins answering senators’ questions on Day Two.

Chairman Chuck Grassley, R-Iowa, was 30 seconds into his first remarks when committee Democrats began demanding that the hearing adjourn or be postponed until the latest set of documents on Kavanaugh’s record could be studied. Repeated interruptions by both Democratic senators and protesters in the audience moved the hearing steadily off-schedule.

Here are three key takeaways from the first day.

Since Kavanaugh’s nomination, the Judiciary Committee has been steadily receiving, reviewing, and releasing documents related to Kavanaugh’s work from the George W. Bush Library and the National Archives. The latest batch of 42,000 pages arrived Monday evening.

Democrats protested that they did not have time to review that material, with Sen. Patrick Leahy, D-Vt., saying that the hearing should not occur at all until everyone had reviewed every document regarding every segment of Kavanaugh’s career.

Republicans reminded everyone that the public already has available nearly 700 judicial opinions (more than 10,000 pages) that Kavanaugh wrote or joined on the U.S. Court of Appeals; 17,000 pages of Kavanaugh’s non-judicial writings and speeches; and (so far) some 350,000 pages of material related to Kavanaugh’s work as associate independent counsel and associate counsel to the president. This volume of information is more than the previous five Supreme Court nominees combined.

The demand for more documents is unusual not only because the committee has so much other relevant material, but because the senators making this demand had long ago announced their opposition to the nomination. In fact, Sens. Cory Booker, D-N.J., and Richard Blumenthal, D-Conn., did so within hours of Kavanaugh’s nomination on July 9.

2. Competing visions of the rule of law.

Lawyers—especially lawyers who are senators—love the phrase “rule of law,” but that phrase can mean different things to different people.

Many use that phrase only to mean that they like the result of a judge or court’s decisions. Others mean that the law, following an objective set of rules and principles, rather than the judge, must decide cases no matter which side wins or loses.

The opening statements by senators suggested one or another of these visions. So will the questions (and answers) in the next few days. Sen. John Kennedy, R-La., put it best when he said, “It’s almost become a cliché but the role of a judge is to say what the law is, not what the law ought to be.”

Sen. Chris Coons, D-Del., brought up the fact that President Donald Trump invoked executive privilege to block the release of some documents, and Sen. Amy Klobuchar, D-Minn., claimed this was the first time this had ever happened in relation to a Supreme Court nomination.

Neither, however, explained why the assertion of executive privilege over these documents was in any way illegitimate or unjustified.

The reason, by the way, that there hasn’t been this much conflict over documents is that senators have previously been much more reasonable in terms of requesting them when legitimate invocations of executive privilege may be involved. For example, when the committee considered President Barack Obama’s nomination of Elena Kagan, the committee did not request records from her service as solicitor general under Obama.

The committee will reconvene Wednesday morning at 9:30. That’s when the real fun will begin.

Each senator will have an opportunity to ask Kavanaugh rounds of questions. Some will take the opportunity to probe Kavanaugh about his legal opinions and reasoning, and others will use the time to grandstand, rail against Trump, and rehash old disputes with the President George W. Bush administration.

Instead, they should take this opportunity to help all Americans who are watching to understand our rule of law and how a potential Supreme Court justice approaches the law.