The Air Force Is Turning 71. Here’s How Far It’s Come. 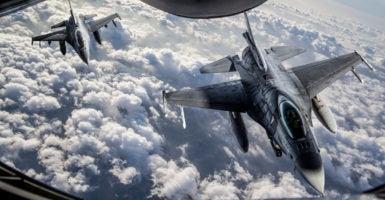 Tuesday, Sept. 18 is the 71st anniversary of the founding of the United States Air Force. As the youngest of the four branches of the Department of Defense, it was born out of the Army’s Signal Corps in 1947 with a mission set that has expanded significantly over the course of its existence.

During its formative years, the service had four major components: Strategic Air Command, Tactical Air Command, Air Defense Command, and Air Mobility Command, which collectively reflected its “fly, fight, and win” motto. Advances in technology and changes in mission sets gave rise to the functional areas of space, special operations, and training—new components with missions as meaty as they were complex.

The decades that followed saw cycles of war and peace, surges in technology, robust budgets, and budgets so lean that the size and readiness of the force was cut to the core. The 28 years since Desert Shield have been filled with constant deployments to the Middle East that have taken a hard toll on aircraft, readiness, and retention.

The last six years have been particularly harsh. Sequestration forced the service to make hard trades in capacity and readiness in order to meet operational demands for the war on terror, while still attempting to prepare for the future. The lack of funding for spare parts forced maintainers to do twice the work, cannibalizing parts from one aircraft to repair another. Successive delays in F-35 and KC-46 development have carried over into production, leaving both the fighter and tanker fleets short of the ready numbers required to train for and execute their respective missions.

The lack of ready aircraft cut fighter pilot flying hours to levels below the “hollow force” days of the Carter administration. Last year, only four of 32 active-duty fighter squadrons were considered mission-ready for a high-end fight. Retention plummeted, and the shortfall of maintainers fell to more than 4,000 in 2016. The service now has more than 1,200 empty fighter pilot billets.

Last year, the Air Force was the smallest it’s ever been, having suffered through arguably the lowest level of readiness in its history. But it appears that downward cycle has now come to an end.

In early 2017, the Trump administration increased the Air Force budget by $24 billion (18 percent) incrementally over two years. While this influx of funding is crucial, it will take years to recover readiness, and when it does, the Air Force will still be too small for the chores on its plate.

In early 2018, the secretary of the Air Force directed a study to determine just how big it needs to be to meet joint warfighter requirements. The results are startling.

While it’s uncertain that even the current level of funding will continue, there is little doubt the service will face significant challenges in the years ahead, and the changes needed to meet those challenges will be equally large.

Near-peer competitors in space have made great strides in recent years, and those strides strengthened arguments for the creation of a Space Force, announced by the president this past June. This force will consolidate all space platforms and facilities from the four other services to create a fifth branch of the military within the Department of Defense.

While this move will affect the Air Force more than all the other services, there is little doubt the Air Force will come through this cycle of change just as it always has: stronger and with a trajectory that is ever skyward.

On its 71st birthday, the Air Force has much to celebrate—and much to look forward to.