This Obscure Law Could Mean a $10,000 Fine for Andrew Cuomo. That’s Absurd. 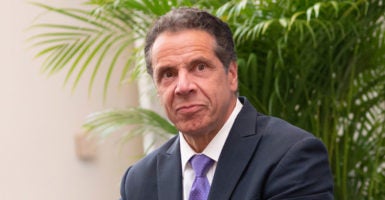 All New York Gov. Andrew Cuomo had to do was stick to the script of his prepared speech on economic development in Lake Saranac, New York.

Instead, Cuomo shared a story Aug. 7 of how he once found a bald eagle’s feather on Lake Saranac and took it home, where it has remained to this day, without realizing that he was confessing to a federal crime.

While speaking to the beauty of the area, Cuomo told the story of the time he and his family found the eagle’s feather while enjoying an afternoon out on the lake.

According to Cuomo, a bald eagle swooped down from the sky, glided right past the family’s canoes, and lost a feather as it flew by, which happened to land near Cuomo’s canoe.

Cuomo retrieved the feather, took it home, and placed it on the family’s fireplace mantel.

It was a rather memorable story.

Memorable, indeed, as taking any part of a bald eagle—including a loose feather—is a federal crime to which Cuomo had blatantly, albeit unknowingly, confessed to committing.

Under the Bald and Golden Eagle Protection Act of 1940 (16 U.S. Code § 668), it is illegal for individuals without a government permit to “knowingly, or with wanton disregard for the consequences of his act, take, possess, sell, purchase, barter, offer to sell, purchase or barter, transport, export or import, at any time or in any manner any bald eagle commonly known as the American eagle or any golden eagle, alive or dead, or any part, nest, or egg [of any bald eagle].”

And each unlawful act constitutes a separate criminal offense.

Based on his account of the story, Cuomo took, transported, and possessed the feather—at least three separate violations of the Bald and Golden Eagle Protection Act.

Cuomo, a Democrat, could face a $5,000 fine and up to one year in jail for each violation. He could also face another $5,000 civil fine per violation for taking the feather.

That could all add up to one pricey trinket.

Since learning about the story, the U.S. Fish and Wildlife Service has referred questions about the incident to the Department of Justice, which has yet to confirm what, if any, action the department will take against Cuomo.

When asked about the story, a spokesman for the New York governor said that neither he nor his family were aware of the federal law.

Unfortunately for the Cuomos, if they are charged for taking the feather, it does not matter if they were aware of the law or not.

In America, ignorance of the law is no excuse. American courts adhere to an ancient Anglo-Saxon legal maxim that ignorance or a mistake of law is not a valid, legal defense to committing a crime.

That rule made sense at the time of America’s founding, when there were roughly 30 federal crimes that everyone would recognize as an obvious “thou shalt not—or else!”

Back then, only crimes involving moral depravity—such as treason, murder, rape, robbery, and theft—were prohibited by criminal law.

During that time, it made perfect sense for courts not to recognize ignorance of law as a valid legal defense because everyone inherently knew these acts were wrong, even if they did not know the law.

As Heritage Foundation scholars have previously explained, ignorance or mistake of law represents the “idea that no one should be convicted of a crime if no reasonable person would have known that the charged conduct was criminal.”

But does this age-old rule still make sense today?

Former Attorney General Edwin Meese III and Paul Larkin Jr., a senior legal fellow at The Heritage Foundation, have long argued that, no, the rule does not make all that much sense today, given the current state of America’s criminal justice system, especially at the federal level.

As they explain, “the [crimes] found in federal law today reach far beyond what common sense and generally accepted moral principles would forbid.”

Since “[t]here is an ever-increasing number of crimes that are outside the category of inherently [immoral] or blameworthy acts,” they argue, a mistake of law defense might now be necessary to protect citizens who unwittingly violate arcane criminal laws only to find themselves, figuratively, up a creek without a paddle.

Or, in Cuomo’s case, back at home with a bald eagle feather.

It still makes sense today for courts not to recognize the mistake of law defense for a crime like murder, but the same cannot be said for many of the more obscure federal crimes that currently exist.

Today, for example, violations of environmental and wildlife conservation laws—like the Bald and Golden Eagle Protection Act—constitute criminal acts, even though such acts are not inherently wrong or immoral.

No reasonable person would know that such acts are criminal. Even the most virtuous and law-abiding citizen would not recognize these acts as being inherently wrong.

If lawmakers are going to continue punishing unwitting Americans for crimes that are not inherently wrong, then it is time for the courts to embrace the mistake of law defense in the American legal system.