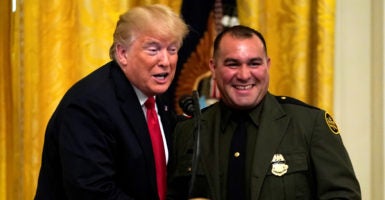 More than 150 officers and agents of two federal agencies, Immigration and Customs Enforcement and Customs and Border Protection, attended the event in the East Room of the White House.

“A coalition of open-borders extremists—and to me that means people that don’t mind crime, they mind it when it happens to them, but they don’t mind it when they have to watch it on television—have waged an unprecedented assault on American law enforcement,” Trump said.

Trump also sent a letter Monday to governors, mayors, and county executives, asking that they pledge their full support and cooperation with ICE and CBP.

The Trump administration has criticized sanctuary policies in some states, cities, and counties that prohibit local law enforcement from cooperating with federal immigration officials.

More recently, some Democrats in Congress have joined activists on the left in calling for the abolishment of ICE, which enforces immigration law throughout the nation’s interior.

“Leading members of the Democrat Party have even launched a campaign to abolish ICE,” Trump said. “In other words, they want to abolish America’s borders. Any politician who puts criminal aliens before American citizens should find a new line of work.”

>>> Related: 4 Key Facts About ICE, and What Could Happen If It’s Abolished

Trump also brought up a recently walked-back public comment by New York Gov. Andrew Cuomo, a Democrat, that America “was never that great.”

“One politician stood up and said our country was never great,” Trump said to laughter. “You heard that. I think that’s the end of that career.”

Trump talked about the work of several immigration agents and invited some to speak briefly. The president told the law enforcement officials that he has their back, and that most of the country is with them.

“A vast majority, 88 percent, 93 percent, I’ve seen numbers, they’re all with you,” Trump said. “It’s just a small group that gets a lot of publicity because they have no courage. They have no guts. They just have big, loud mouths.”

During a panel discussion before Trump’s remarks, Sen. David Perdue, R-Ga., said that abolishing ICE “would be like abolishing the Marines.”

Perdue also said he expects Congress to approve funding for a wall on the southern border.

“I’m optimistic we’ll get it done,” he said.

However, only 25 percent of voters supported abolishing ICE in a poll conducted by Politico and Morning Consult.