Former Obama Supporter Explains Why She Chose to #WalkAway 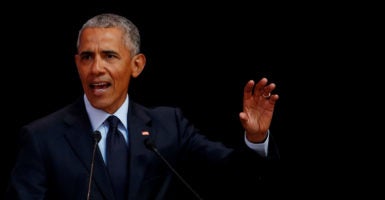 Yukii said that she grew up in a left-leaning household and attended the first inauguration of then-President Barack Obama and was in Washington, D.C., to celebrate his second inauguration. (Photo: Siphiwe Sibeko/Reuters/Newscom)

A former Obama supporter says she joined the “#WalkAway Campaign,” a movement that highlights stories of why people walk away from leftist ideology, because she could no longer subscribe to what the Democrat Party aligned itself to.

“I did vote for our current president and I will vote for him again in 2020, and just seeing how the left has become or is extremely dehumanizing. They are not into logic; it is all about your emotions, it is all about, ‘I feel like this, so therefore, it is fact,’” a YouTube user whose handle is Tumi Yukii said in a video posted July 10 to the video-based site.

Yukii said she grew up in a left-leaning household, attended the first presidential inauguration of Barack Obama, and was in Washington, D.C., to celebrate his second inauguration.

She said her political convictions began changing when she saw the party’s inconsistencies.

“I was raised a Democrat, I was raised to believe that, you know, Republicans, conservatives, who are old school, right-wing, racist[s] who wanted to keep America like the 1940s or the slavery times,” Yukii said. “You know, I was brought to different political events as a kid, all that kinda stuff.”

The WalkAway Campaign Facebook page, which has over 60,000 likes, advertises on its wall the “WalkAway Campaign” Facebook group, which includes over 151,000 members and is a place for members to share their story of why they are no longer part of the left.

The movement was founded by Brandon Straka, a former liberal, and is a “video campaign movement, dedicated to sharing the stories of people who can no longer accept the current ideology of liberalism and what the Democratic Party has become,” according to the campaign’s website.

Yukii said the 2016 presidential election showed her how the left demonizes those who it does not agree with.

“Everybody loved Donald Trump, black people included,” Yukii said. “He was an idol to a lot of black people, rappers would make songs about him. Rappers and all different types of people would hang out with him until he became a candidate for the 2016 election cycle, not running as a Democrat. Then everybody said he was a racist, he was so sexist … everybody was coming out of the woodwork with an evil story to tell.”

The liberal-turned-conservative said that many liberals today aren’t even able to come to terms with the history of their party.

“When you try to hit them with the facts, even basic facts like the history of their own party, like Margaret Sanger who started Planned Parenthood … she spoke to women in the KKK and said we don’t want word to get out that we are actually trying to exterminate the Negro race,” Yukii said. “She was into eugenics, she was into sterilizing black women, which she did, giving black women hysterectomies, and Hillary Clinton said that Margaret Sanger was her idol.”

Yukii said that folks like Rep. Maxine Waters, D-Calif., who recently called on supporters to harass members of Trump’s administration, are on the wrong side of public discourse.

“I was just in shock because what is she doing; she shouldn’t be running around telling people to hurt Trump supporters, she should go and fix what she is supposed to fix, but she is not,” Yukii said.

“I don’t see myself ever returning to the Democrat Party,” Yukii said.

This video where Yukii details her story, titled “Why I Chose to #WalkAway, My Story!,” has received well over 100,000 hits.

Other videos Yukii has published on her channel have received anywhere from 28 views (“How to Write A Book In Three Months, Part Two”) to a couple hundred views (“Why You’re In the Wilderness”) to a few thousand views (“Candace Owens, Alex Jones, and Liberal Hate”).