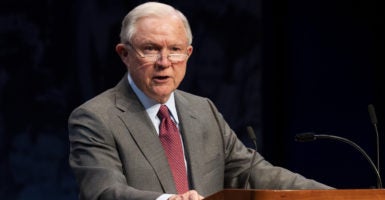 The Justice Department "will not partner with groups that unfairly defame Americans for standing up for the Constitution or their faith," Attorney General Jeff Sessions, pictured here July 24, vows Wednesday in a speech to Alliance Defending Freedom's Religious Liberty Summit. (Photo: Michael Brochstein/Zuma/Newscom)

The SPLC, a liberal nonprofit group which tracks groups like the Ku Klux Klan, has labeled ADF a hate group, as well as other conservative-leaning organizations.

“People of faith are facing a new hostility. Really some of it is a bigoted ideology which is founded on animus towards people of faith,” Sessions told the ADF conference. “You’ll notice that they don’t rely on the facts. They don’t make better arguments. They don’t propose higher ideals. They just call people names—like ‘hate group.’ Does that sound familiar?”

“They have used this designation as a weapon and they have wielded it against conservative organizations that refuse to accept their orthodoxy and choose instead to speak their conscience,” Sessions said of the hate group label. “They use it to bully and intimidate groups like yours which fight for the religious freedom, the civil rights, and the constitutional rights of others.”

He later said to the ADF, “You and I may not agree on everything—but I wanted to come back here tonight partly because I wanted to say this: You are not a hate group.”

Sessions also announced a new review at the Justice Department.

The SPLC took a pre-emptive strike with a public letter on Tuesday criticizing Sessions for speaking to the ADF conference.

“If the ADF had its way, gay people would be back in the closet for fear of going to jail,” SPLC President Richard Cohen said in the letter to Sessions. “It’s inappropriate for the nation’s top law enforcement officer to lend the prestige of his office to this group. And it’s ironic to suggest that the rights of ADF sympathizers are under attack when the ADF is doing everything in its power to deny the equal protection of the laws to the LGBT community.”

In May, ADF announced it had been removed from an Amazon program that donates a percentage from purchases to charities due to Amazon’s reliance on SPLC to vet the charities in that program. In 2017, charity tracker GuideStar noted which charities were seen as hate groups by Southern Poverty Law Center, although the organization eventually reversed course and removed the labels.

The center has also reportedly worked with several of the big tech companies: “Facebook, Amazon, Google, and Twitter all work with or consult the Southern Poverty Law Center (SPLC) in policing their platforms for ‘hate speech’ or ‘hate groups,’” wrote The Daily Caller News Foundation in June.

Additionally, SPLC is regularly cited by media, including in references to ADF when Sessions spoke to the group last year.

There were hate groups in the South I grew up in. They attacked the life, liberty, and the very worth of minority citizens. You may not know this, but I helped prosecute and secure the death penalty for a klansman who murdered a black teenager in my state. The resulting wrongful death suit led to a $7 million verdict and the bankruptcy of the Klu Klux Klan in the South. That case was brought by the Southern Poverty Law Center.

But when I spoke to ADF last year, I learned that the Southern Poverty Law Center had classified ADF as a ‘hate group.’ Many in the media simply parroted it as fact. Amazon relied solely on the SPLC designation and removed ADF from its Smile program, which allows customers to donate to charities.

Sessions praised the ADF for having a 9-0 record in the Supreme Court for the last seven years, adding he wished the Justice Department had such a strong record.

The attorney general also discussed the history of religious liberty in the United States.

Sessions talked about attacks on religion in the Middle East, Russia, and the Philippines. But he said the Founders sought to avoid this in the United States. He quoted father of the Constitution and former President James Madison, who first declared religion an unalienable right, leading to the First Amendment.

“Adams and Jefferson were political opponents—but they agreed on the human right of religious freedom. But that consensus seems to be eroding,” Sessions said. “We’ve seen nuns ordered to pay for contraceptives. We’ve seen U.S. senators ask judicial and executive branch nominees about their dogma—a clear reference to their religious beliefs—even though the Constitution explicitly forbids a religious test for public office.”

The Justice Department, which recently established a religious freedom task force, has made defending the first freedom a priority, Sessions said.

“Americans from a wide variety of faiths are asking themselves, how much longer until I am in Jack Phillips’ position?” Sessions said. “How much longer until the state, the media, the academy, the tech companies, or the global corporations come down on me because of my beliefs?”