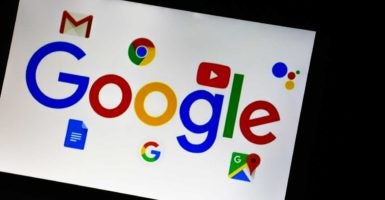 This week, the conspiracy website Infowars, which is run by Alex Jones, was either “banned” or had content stripped from most social media platforms.

YouTube cited “hate speech and harassment” as reasons to remove Infowars from the platform, Apple explained that “hate speech” wouldn’t be tolerated, and Facebook announced: “Upon review, we have taken it down for glorifying violence … and using dehumanizing language to describe people who are transgender, Muslims and immigrants, which violates our hate speech policies.”

Private companies can, of course, censor whomever they like, but the pattern of behavior from Silicon Valley toward speech in general—and continual inability to treat conservative views fairly on their extremely powerful platforms—is rightly concerning to conservatives who use those platforms.

Infowars is hardly a conservative website, but some fear that the social media “deplatforming” of its content will bleed over to other more mainstream outlets—especially right-leaning ones that don’t conform with the overwhelmingly left-wing values of the tech industry.

Given the vague and increasingly expanding use of the term “hate speech,” it’s not unreasonable to think that purging Infowars is the tip of the iceberg.

This belief was exacerbated by Sen. Chris Murphy, D-Conn., who took to Twitter to suggest just that.

Infowars is the tip of a giant iceberg of hate and lies that uses sites like Facebook and YouTube to tear our nation apart. These companies must do more than take down one website. The survival of our democracy depends on it.

Unfortunately, there has been a troubling pattern of behavior from social media companies.

For instance, YouTube, an internet video company, has relied on the Southern Poverty Law Center, a far-left activist organization, to police its website under the “Trusted Flaggers” program.

While SPLC is often used by media companies to designate “hate groups,” it has been loose with the definition, lumping in traditional conservative and religious organizations, like the Family Research Council, in with the Ku Klux Klan and other similar groups.

And there have been other troubling signs of looming censorship of conservative views in particular.

When Google launched a fact-checking tool in January, it almost exclusively targeted conservative publications and made some dubious claims about incorrect information on those websites.

Google backed away from this fact-checking tool after it was hammered by conservative—and even some liberal—media outlets for displaying embarrassingly rank bias—whether the product of faulty algorithms or perhaps other reasons.

The article focused on a joke about CNN using a literal washing machine to “spin news,” and was quite clearly a joke.

Facebook later apologized for the situation and relinquished its threat.

The Infowars ban also comes in the wake of widespread rumors that Twitter has been “shadow banning” some prominent conservative accounts, meaning that it somehow filters out some content without outright banning accounts.

Twitter denied any kind of shadow ban, but seemed to admit in its denial that it had made it harder to find content from some conservative users.

“We do not shadow ban,” Twitter said in a statement. “You are always able to see the tweets from accounts you follow (although you may have to do more work to find them, like go directly to their profile).”

That response was hardly comforting.

“Uh, call me crazy, but that parenthetical sounds a lot like an admission that Twitter effectively shadow bans users,” wrote Alex Griswold of The Washington Free Beacon, a conservative website.

Many of these actions could be innocuous, or they could be the way an overwhelmingly liberal industry, as fired Google employee James Damore has warned, suppresses information it doesn’t agree with.

It’s fair to say that social media platforms, like Twitter, have seemed far from even-handed in how they define things like “hate speech” for liberals and conservatives, which is their prerogative. And it is our prerogative as conservatives to use other platforms.

In May, a coalition of conservatives published a missive directed at tech companies, laying out four ways in which they can gain conservatives’ trust: “Provide Transparency,” “Provide Clarity on ‘Hate Speech’,” “Provide Equal Footing for Conservatives,” and “Mirror the First Amendment.”

You can read the proposal here.

However this issue is dealt with, it must be acknowledged that there is an increasing problem with media and social media bias that can’t simply be ignored.