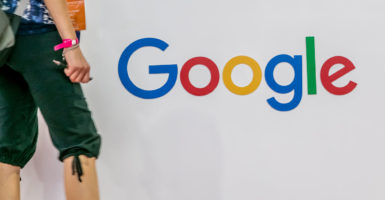 Problems emerge when tech companies such as Google "get to define what offensive is,” James Damore, an engineer fired by Google for politically incorrect views, says at the Conservative Political Action Conference. (Photo: Imagine China/Newscom)

Bias and mass censorship from extraordinarily powerful tech companies create an enormous problem that Americans have to come to terms with, says a former Google employee who was fired for his politically incorrect views.

While tech companies in Silicon Valley and elsewhere are incentivized to create a “safe and civil” environment for their customers, problems emerge when “they get to define what offensive is,” James Damore said during a breakout session at the Conservative Political Action Conference, or CPAC.

Damore lost his job as an engineer in August over an internal memo he wrote questioning Google’s gender diversity policies, which went public. He initially filed a complaint about his firing with the National Labor Relations Board, but withdrew it and filed a class-action lawsuit against the company.

Most of those who work in the tech industry have had little contact with conservative ideas and have “lived in liberal bubbles their entire lives,” Damore said during a CPAC session Friday titled “Suppression of Conservative Views on Social Media.”

Sobering survey results on what it's like to work in Silicon Valley. My experience was just the tip of the iceberg.https://t.co/g5XvEpTQBW

Unfortunately, this often means that people with another viewpoint can’t be open about it, he said, “because they will be ostracized.”

This culture naturally makes its way into how tech companies do business, Damore said.

While many in the tech industry are well-meaning, he said, bias seeps into their algorithms. This presents a unique challenge for conservatives who have a reason to worry about bias, but are unlikely to look for government intervention to solve the problem.

Although many are calling for government involvement to fix the situation, Damore said, “it is vital we protect the norms of free speech.

Harmeet Dhillon: "Google has an army of lawyers who are actively lobbying the NLRB to cut back worker rights, not just in James's case, but in cases of discussing their working conditions with each other." From https://t.co/ShnHDGXPPA pic.twitter.com/H0ig1QwOed

Keeping the tech industry accountable will require a strict focus on transparency and accountability, he said.

Damore praised The Daily Caller News Foundation for its reporting on the bias of Google’s fact-checking feature, which almost exclusively targeted conservative websites.

“Not only is Google’s fact-checking highly partisan—perhaps reflecting the sentiments of its leaders—it is also blatantly wrong, asserting sites made ‘claims’ they demonstrably never made,” the news organization reported in January, when the fact-check feature was first released.

Google discontinued the feature shortly after accusations of bias against conservatives were the subjects of such reports.

Ultimately, Damore said, transparency is essential and Americans should understand the practices of social media companies such as Facebook, Twitter, and Google.