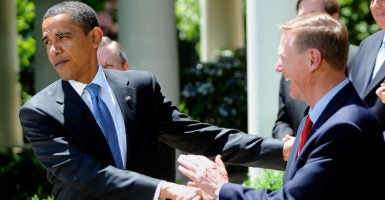 President Barack Obama jokes with Alan Mulally, then president and CEO of Ford Motor Co., in the Rose Garden of the White House on May 19, 2009, after announcing new fuel efficiency standards to curb auto emissions. (Photo: Olivier Douliery/MCT/Newscom)

California has been permitted to set its own auto emissions standards under a federal waiver. But President Donald Trump’s Environmental Protection Agency and National Highway Traffic Safety Administration could seek to eliminate this waiver as part of the proposed rule change.

Twelve states, concentrated in the Northeast and Pacific Northwest, follow California’s lead with stricter emissions standards, as does—closer to the White House—the District of Columbia.

Democratic Party officials quoted in Politico warn that the Trump administration’s proposal could create a rift between red states and the blue states that adopted California’s stricter emissions standards.

If the new proposal is implemented, California and the 12 other states would need to observe the new federal rules on emissions.

“Since California started to determine the stringency of fuel economy standards, new car prices have increased $6,800 above the pre-2009 baseline trend, according to estimates in a Heritage Foundation study,” said Marlo Lewis, a senior fellow with the Washington-based Competitive Enterprise Institute, adding:

The National Auto Dealers Association estimates the federal standards demanded by California will add $3,000 to the cost of new motor vehicles by 2025, potentially pricing millions of low-income households out of the market for new cars. Kicking California bullies out of the fuel economy playground will expand consumer choice while making new cars more affordable.

The proposed rule change is a joint effort by the EPA and the highway safety agency, part of the Department of Transportation.

“We are delivering on President Trump’s promise to the American public that his administration would address and fix the current fuel economy and greenhouse gas emissions standards,” acting EPA Administrator Andrew Wheeler said in a press release.

The two agencies are soliciting public comments “on a wide range of regulatory options, including a preferred alternative that locks in [model year] 2020 standards through 2026, providing a much-needed time-out from further, costly increases.”

The Trump administration’s “preferred alternative” is expected “to prevent thousands of on-road fatalities and injuries as compared to the standards set forth in the 2012 final rule,” according to a press release.

Congress first enacted the Corporate Average Fuel Economy (CAFE) standards in 1975 in response to the Arab oil embargo of 1973 that limited gasoline supplies and drove up prices.

The idea was to reduce American dependence on foreign oil. The latest version of CAFE and emissions standards for light-duty vehicles is called SAFE, an acronym for Safer Affordable Fuel-Efficient Vehicles Rule for Model Years 2021-2026 Passenger Cars and Light Trucks.

“Our proposal aims to strike the right regulatory balance based on the most recent information and create a 50-state solution that will enable more Americans to afford newer, safer vehicles that pollute less,” the EPA’s Wheeler said. “More realistic standards can save lives while continuing to improve the environment.”

The existing CAFE standards contributed to rising costs of new automobiles to the point where they are “out of reach for many American families,” EPA and highway safety administration officials contend.

When the cost of the CAFE standards finalized in 2012 are compared with the Trump administration’s preferred alternative, keeping those standards in place “would add $2,340 to the cost of owning a new car, and impose more than $500 billion in societal costs on the U.S. economy over the next 50 years,” they say.

Bill Wehrum, assistant administrator for the EPA’s Office of Air and Radiation, discussed the potential consumer benefits of the proposed rule change in a conference call Thursday with reporters.

In response to a question from The Daily Signal, Wehrum said officials at the EPA and the Department of Transportation are trying to “occupy a sweet spot” between “stringent standards” and potential “disincentives” to buying new vehicles.

“Our current analysis says that there’s a tension on the one hand between our desire to regulate greenhouse gases from cars and trucks versus NHTSA’s obligation to assure highway safety,” he said.

“Our analysis shows that beyond a certain point the more stringent that vehicle efficiency standards become, that translates into higher costs to the production from motor vehicles to include the technology necessary to meet the more stringent standards and the higher cost of production means higher prices to consumers,” Wehrum said. “So, our analysis shows that under the current program as you continue to increase the stringency, you continue to increase vehicle costs, and what that means is fewer new cars are purchased and put on the road.”

Putting new cars on the road is the best thing we can do to both reduce emissions and to promote highway safety, and conversely, creating disincentives to purchase of new cars means people are driving older and less clean, less safe cars longer. Our analysis shows there is substantial benefit associated with leveling out the standard to 2020 when it comes to highway safety, as compared to the current standards that go to 2025.

In fact, the benefit of leveling out the program with regard to highway safety far outweighs the benefits associated with the incremental emission reductions that we would achieve under the current program. We are taking a holistic look at this because we have to. We can’t at EPA blindly seek additional emissions reductions if we know, as our analysis suggests, that that will result in this benefit when it comes to highway safety.

We and NTHSA are trying to occupy a sweet spot, a place that guarantees stringent standards—which of course the 2020 standards do—but at the same time, not so stringent that we create a disincentive to the purchase of new cars and a disincentive that translates into additional injuries and fatalities on the road.

‘Out of the Driver’s Seat’

A study earlier this year from the National Highway Traffic Safety Administration found new model year vehicles are safer than old ones, and when involved in accidents result in fewer deaths.

“There are compelling reasons for a new rulemaking on fuel economy standards for 2021-2026,” Transportation Secretary Elaine L. Chao said in the release. “More realistic standards will promote a healthy economy by bringing newer, safer, cleaner and more fuel-efficient vehicles to U.S. roads and we look forward to receiving input from the public.”

“The administration’s announcement that it will relax future fuel economy (CAFE) standards is good news for consumers,” Ebell said. “It means that the federal government will have slightly less control over the kinds of cars and trucks people can buy. It might even cause car prices to stop increasing so rapidly.

“Even better news is the decision to take California out of the driver’s seat for setting CAFE standards for the entire country. Letting one state make decisions for people in other states makes a bad program even worse, especially since the state is California, which has been pursuing an anti-car agenda for decades.”

The public will have 60 days to provide feedback once the proposed rule is published in the Federal Register. Details are available at the highway administration’s website here and EPA’s website here.