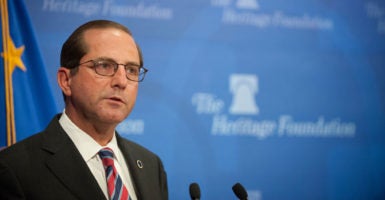 In the spirit of the late President Ronald Reagan, Azar emphasized that the Trump administration’s major health care policy initiatives would rely heavily on harnessing the creative powers of federalism and reaffirming state innovation, the central role of free-market principles of choice and competition, and a commitment to practical problem-solving with a clear-eyed grasp of political and economic conditions.

His July 26 remarks at The Heritage Foundation were vintage Reagan.

Azar focused his address on the multiple complexities of prescription drug pricing, bridging the gap between spending and the value of medical goods and services, and the urgent need to repair the nation’s severely damaged health insurance markets.

“President Trump’s budget proposes to replace the entirety of the [Affordable Care Act] subsidy structure, as well as the Medicaid expansion, with a flexible block grant,” he said. “As many of you know, this is similar to a proposal put forth by state and think tank leaders, including some Heritage scholars.”

Rather than the promised drop in insurance costs and rise in private coverage—supposedly guaranteed by the individual mandate to enroll in insurance—Americans experienced exactly the opposite.

Over the past four years, health insurance premiums doubled, accompanied by soaring deductibles. Even as the mandate penalties increased, individual market enrollment peaked and fell, particularly among unsubsidized people.

“From 2016 to 2017,” Azar said, “HHS found that the number of unsubsidized enrollees dropped by about 20 percent. The only factor keeping the individual market alive is the tens of billions of dollars of subsidies supplied directly to insurers each year.”

“Young people are, by definition, getting less than they pay for, so they opt out of the system. And then that’s not a good deal for older Americans either. They’re the only ones left paying into the system, so their premiums rise,”  Azar said.

So, too, do taxpayers’ premium subsidy costs.

The law’s Medicaid expansion also turned out to be weird social policy. By adding 15 million able-bodied, childless, and mostly employable adults to this poorly performing welfare program, Azar noted, federal taxpayer funding is “more generous” for states covering the newly eligible Medicaid recipients—covering 90 percent of their costs—than federal funding for the traditional Medicaid beneficiaries, the elderly and disabled, and women and children in poverty.

The states’ diverse health insurance problems, he noted, are best resolved by the people of the states themselves.

Replacing Obamacare’s subsidy scheme with a flexible block grant that protects consumers’ choices would secure guaranteed funding to address the needs of the poor and the sick, while rejuvenating the private health insurance markets.

As Azar noted, this commonsense approach to health reform “hearkens back” to Reagan’s ambitious “New Federalism” proposal, which would have transferred a great deal of authority over health and welfare to the elected representatives of the people of the states.

Likewise, the Welfare Reform Act of 1996, which transferred power to the states within federal guidelines, proved to be profoundly successful, generating major reductions in poverty and new job opportunities for low-income citizens.

Mysterious drug interactions: There is an enormous gap in the high performance of pharmaceutical research and development, providing new therapies for the treatment and cure of diseases, and the dysfunctional markets for pharmaceutical products.

In fact, says Azar, “We do not have a real market for prescription drugs.”

The status quo is a complex and confusing process of negotiated payment agreements among health insurers, corporate executives, and pharmaceutical benefit managers.

There is little transparency, and consumers are economically powerless.

In the Medicare drug program, where free-market principles of choice and competition play a much stronger role, conditions are better. In fact, in Medicare Part D’s competitive system of private drug delivery, financed on a defined-contribution basis, seniors can get a broad range of drug therapies. Though the program needs improvement, Azar notes, Part D has run “tens of billions of dollars under budget.”

Health and Human Services will tackle drug pricing problems under its broad administrative authority over Medicare and Medicaid, Azar says, by “stoking competition” and bringing down out-of-pocket costs, along with a targeted importation of drugs from abroad.

Value for dollars: In the normal American economy, consumers freely exchange their dollars for the value of goods and services, but not in health care.

“The problem with so many efforts to pay for value—including those undertaken by President Barack Obama’s administration—is that they assumed central planners, the government, have to be the ones to determine value,” Azar said.

“But if the government writes the equation for value, the answer is never going to be cheap or simple, and special interests will find a way to manipulate it.”

Short of a full-scale overhaul of health care financing, especially reform of the federal tax treatment of health insurance, the Trump administration can only take incremental steps to secure value—that is, better care at lower cost—such as  reducing the unnecessary transactional costs imposed on providers through excessive regulation.

The administration, for example, is streamlining the payment system for physician evaluations, to secure an average reduction of 51 hours of physician paperwork annually. The Trump administration is also undertaking a comprehensive review of Health and Human Services regulations to foster more efficient care delivery and care coordination.

“One of the ironies of our politics today,” Azar said, “is that those who call ourselves conservatives are the ones who recognize the need for change. The political heirs of those who called themselves progressives too often no longer believe in progress, and instead propose expanding, even ossifying, programs that date back more than half a century.”

In health care, the progressive paradigm is tiresomely familiar: centralized control, top-down decision-making, and reliance on government coercion rather than persuasion.

Conservatives have an alternative paradigm, based on decentralized power and personal freedom. The task is to transform that superior vision into reality, and craft consequential health reforms that will lower cost and expand coverage choices for millions of individuals and families.