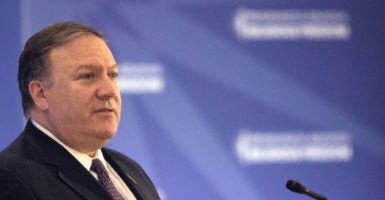 Secretary of State Mike Pompeo delivered an address to the Chamber of Commerce on July 30. (Photo: Alex Wroblewski/Reuters /Newscom)

In the coming days and weeks, there’s going to be a lot of analysis of the vision for American economic engagement in the Indo-Pacific that Secretary of State Mike Pompeo laid out at the Chamber of Commerce on Monday.

Most of it will be wrong.

America’s economic strength and competitive advantage in the Indo-Pacific lies in the U.S. private sector. In fact, the U.S. has more than the trillion dollars the Chinese tout to invest in infrastructure and the like.

The catch is that decisions to deploy this capital reside in corporate boardrooms, not the government. That’s the way it should be. American companies are responsible to their shareholders, not the impulses of geopoliticians who are all too willing to dream big with other people’s money.

For the companies, this is both good and bad. On the positive side, they can focus on what matters most to them—namely, return on investment.

On the negative side, they have to live with their choices.

Take Chinese abuse of intellectual property rights. One overlooked facet of this problem is that most American companies went into China knowing the bargain. The companies’ joint ventures and tech transfers were integral parts of their business plans.

A very prominent American businessman in China went so far as to tell me, “Companies were competing to give away their technology.” In such cases, it is not the U.S. government’s role now to go to bat for them—especially at the larger cost to the U.S. economy.

The great thing about Pompeo’s speech is that he recognizes—and actually promotes—the separation between government and business. The U.S. government can provide technical economic assistance to strategically important countries, which is the better way to describe the $113 million in “investments” the secretary announced.

The real investments, however, are going to come from the American private sector. And, as Pompeo pointed out, they are going to be made based on the business climates in those countries.

Pompeo also pointed to the $60 billion provided in the BUILD Act, which is now pending in Congress. This is the imperfection in the speech. The BUILD Act needs a lot of work if it is to be more than just a super-sized business facilitation program.

The pothole Pompeo avoided was portraying stepped-up American engagement as anti-China. As he departs for Malaysia and Indonesia, and for Association of Southeast Asian Nations meetings in Singapore, he seems well aware that the region will not be receptive to engagement on anti-China terms.

Many capitals in Southeast Asia have concerns about China’s intentions, but it’s complicated. They prefer to deal with growing Chinese power by making as many friends as possible, not by uniting against a common enemy.

This is where the bad analysis comes in.

The administration’s strategy will be portrayed as insufficient by both hawks on China and those already prepared to throw in the towel in the competition with China.

America has been good for the Indo-Pacific. We have our own time-proven, market-based model for engaging. We need not become more like China in order to compete with it.