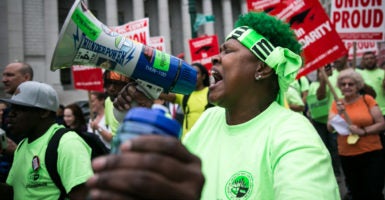 Sally Coomer of Seattle, who cares for her disabled adult daughter at home, doesn’t like the fact that union dues are deducted from the Medicaid payment she gets for her services under a Washington state policy.

“The money that is taken out in union dues, if it was not siphoned off, could be used to provide for more care,” Coomer told The Daily Signal about the Medicaid stipend given to home care providers.

Washington is one of 11 states where the state governments work with public-sector unions to automatically deduct a portion of the Medicaid stipend and divert it to unions representing state employee unions.

The other states are California, Connecticut, Illinois, Maryland, Massachusetts, Minnesota, Missouri, New Jersey, Oregon, and Vermont, according to the State Policy Network, a conservative think tank that focuses on state issues.

However, the states face pushback from the Trump administration and, potentially, the courts in light of a recent Supreme Court ruling striking down mandatory payments to public employee unions by employees who don’t belong to the union.

The rule proposed by the Centers for Medicare & Medicaid Services would eliminate states’ ability to divert part of Medicaid payments from providers to a third party.

Home caregivers are often relatives or close friends of a family, and they receive the Medicaid stipends for in-home care that varies based on hours required.

Caregivers may pay up to $1,000 per year in union dues, according to the State Policy Network, which says state governments are “dues-skimming” an estimated $200 million per year from home health providers and $50 million from child day care providers to give to unions.

Coomer’s daughter Becky, almost 28, has cerebral palsy and a disorder that causes seizures. She is blind and developmentally disabled.

Coomer, who has become an advocate for other families who don’t want to be forced to pay union dues, said many home care providers are not aware they have a choice in joining a union.

To qualify in Washington state, family members are required to go to an orientation run by the Service Employees International Union, which represents state government employees.

“At the orientation, they would tell people they are required to sign up,” Coomer said. “I don’t know what benefit we get from the dues. The only time I hear from the union is when they inundate me with a political agenda.”

The Social Security Act generally prohibits states from making payments for Medicaid services to anyone but the provider, according to the Centers for Medicare & Medicaid Services. Exceptions include a court order for wage garnishments or child support.

However, in 2014, under the Obama administration, the CMS revised the regulation to provide for a new exception that primarily includes independent, in-home personal care workers, to allow a state to divert part of the Medicaid payment to third parties such as a union.

Under the Trump administration, the CMS determined that the Obama administration rule is not consistent with the statute. Under the proposed rule, providers still would be free to voluntarily join a union and pay union dues from their own pockets.

“The law provides that Medicaid providers must be paid directly and cannot have part of their payments diverted to third parties outside of a few very specific exceptions,” Tim Hill, acting director for the Center for Medicaid and CHIP Services, said in a public statement. “This proposed rule is intended to ensure that providers receive their complete payment, and any circumstances in which a state does divert part of a provider’s payment must be clearly allowed under the law.”

The Service Employees International Union, or SEIU, framed the proposal as an effort to prevent home care workers from unionizing. It issued a statement from union member Melody Benjamin, an Illinois home care worker.

“Together, home care workers are making these poverty-wage jobs into a respected profession and we will not allow any special interest group or self-interested politicians to silence our voices or endanger the high quality care we provide,” Benjamin said in the statement.

In 2014, the Supreme Court ruled in Harris v. Quinn that in-home care providers cannot be forced to pay union dues to qualify for Medicaid funds. That didn’t prevent states from collecting dues, this time indirectly, before the money reaches the provider.

In states such as Oregon and California, providers have only a 10-day window to opt out of paying the dues, according to the State Policy Network.

The top beneficiaries of the Medicaid deductions across the country are the Service Employees International Union and the American Federation of State, County and Municipal Employees (AFSCME), the largest unions representing public-sector employees, said Max Nelsen, director of labor policy at the Freedom Foundation, a conservative group in Washington state.

“The Supreme Court ruling [in Harris v. Quinn] helped. Previously, home care providers could be classified as state employees,” Nelsen told The Daily Signal. “What they are doing now is short of requirements, but still coercive. Unions just rewrote the membership forms and SEIU playbook after Harris.”

Last month, the Supreme Court ruled in the case of Janus v. AFSCME Council 31 that public employees can’t be compelled to pay union dues or other fees. The high court ordered the U.S. 7th Circuit Court of Appeals to reconsider its 2017 decision rejecting a case brought by in-home care workers seeking to recoup Medicaid dollars.

It’s likely the ruling could have a significant impact on the Medicaid issue, said Thomas Jipping, a senior legal fellow with The Heritage Foundation.

“Janus was an expansive decision,” Jipping told The Daily Signal. “The Supreme Court has already told the U.S. Court of Appeals for the 7th Circuit to reconsider its decision on the issue you raise.”

Mark Janus, an Illinois state worker, and other plaintiffs filed the case in light of the Harris ruling. While the Janus ruling would be helpful, it likely won’t have an immediate direct impact on the Medicaid rule change, Nelsen said.

“There are some principles outlined in the Janus decision that may ultimately be helpful in reversing some union practices, but nothing that would categorically stop states from collecting union dues from caregivers’ Medicaid payments.”