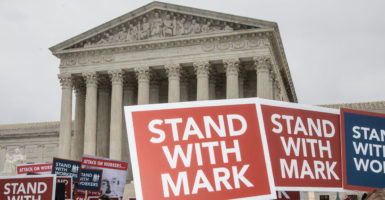 On the last day of its 2017-18 term, the Supreme Court’s decision in Janus v. AFSCME on Wednesday strengthened the First Amendment right to free speech and showed how the court should analyze whether to overrule one of its previous decisions.

In the labor context, a “bargaining unit” is a group of employees with clear and identifiable common interests. If a majority of unit employees vote to be represented by a union, the union exclusively represents all employees, even those who do not join the union.

In this case, Mark Janus is a child support specialist in the Illinois Department of Healthcare and Family Services. His unit is represented by the American Federation of State, County and Municipal Employees union, which he refused to join because he opposes many of the union’s positions on policy issues.

Because he is not a union member, Janus pays about 78 percent of the full “agency fee” imposed by the union on all its members. This portion covers union activities “germane” to collective bargaining, but not the union’s political or ideological activity.

This agency fee arrangement was upheld by the Supreme Court in its 1977 decision in Abood v. Detroit Board of Education.

The Illinois governor filed a lawsuit, arguing that this imposition of agency fees on nonconsenting employees violates the freedom of speech protected by the First Amendment.

Janus joined the lawsuit and became the lead plaintiff when the courts dismissed the governor from it. The district court dismissed the suit altogether because, it said, the Abood ruling had already decided this issue, and the appeals court agreed.

In Wednesday’s 5-4 decision, written by Justice Samuel Alito, the Supreme Court said Abood was “inconsistent with First Amendment principles” and should be overruled.

This agency fee arrangement amounted to “compelling a person to subsidize the speech of other private speakers.” Labor relations experts will have much to say about agency fees and how this decision will affect labor-management relations.

Just as important as the result in this case itself, however, is how the court reached that result.

The Supreme Court has long embraced the principle of “stare decisis,” which means “to stand by things decided.” There’s a presumption that the court will stick by its previous decisions, a principle that Alito in his 2006 confirmation hearing said was “very important.”

The court has said that overruling a previous decision requires “special justification” or, as in Wednesday’s Janus decision, “strong grounds.”

Over the years, the court has identified several criteria for determining whether those “strong grounds” exist. By showing how to apply those criteria, the Janus decision could be useful in the future when other precedents might be up for reversal or retention.

Alito addressed five “stare decisis” principles to rebut the presumption in favor of maintaining precedent. First, he questioned the “quality of Abood’s reasoning,” including its misplaced dependence on two precedents involving agency fees for private-sector unions and its deferential approach toward free speech restrictions.

Fourth, Alito found that Abood had become outdated by the rapid rise in public-sector union membership.

Fifth, Alito addressed the issue of “reliance,” which featured prominently in Justice Elena Kagan’s dissent. Alito dismissed claims that Abood was an essential part of American law and everyday life.

He cited significant lack of clarity, litigation that continued to challenge its existence, and the short-term duration of collective bargaining agreements.

Finally, the court once again stated the principle that “stare decisis” is “weakest” with precedents that interpreted the Constitution.

Congress can quickly and easily correct the court’s errors in construing a statute. But correcting a misinterpretation of the Constitution requires an amendment voted for by two-thirds of Congress and ratified by three-fourths of the states.

That is why the court is more open to correcting errors in past constitutional cases, such as Abood, than in other categories of cases.

In Janus, the Supreme Court placed the constitutional right of free speech ahead of the statutory preference given to labor unions and showed that past decisions on constitutional issues can be overruled on principled grounds.