This Bill Would Ease ‘Recovered’ Species Off the Endangered List 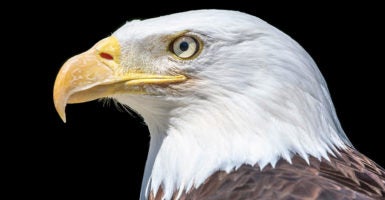 The bald eagle, a traditional symbol of America, is one of the few species to make it off the endangered list since 1973. That occurred in 2007, nearly 100 years after the eagle first was granted protected status. (Photo: ImageBroker/Kim Petersen/Newscom)

It will be easier to take wildlife off the endangered and threatened lists if Congress passes a bill introduced by Rep. Andy Biggs, R-Ariz.

“The Endangered Species Act has been used as a sword instead of a shield,” Biggs told The Daily Signal in a phone interview.

His bill would streamline the process of removing a species from the endangered list if the nation’s secretary of the interior “receives an objective, measurable, and scientific study demonstrating a species has recovered,” the Arizona Republican said in a press release.

Enacted in 1973, the Endangered Species Act provides a “framework to conserve and protect endangered and threatened species and their habitats,” according to the U.S. Fish and Wildlife Service.

Biggs’ bill is one of several measures introduced last week by House Republicans aimed at updating the Endangered Species Act.

His legislation includes provisions addressing the issue of a species being “wrongfully listed,” as well as penalizing those who “intentionally submit false or fraudulent data in order to cause a species listing.”

The bill would also provide a way for the U.S. Fish and Wildlife Service to “promptly take action when a species is wrongfully listed, rather than letting the problem linger in federal bureaucracy,” according to the press release.

“This will allow us to focus resources to protect species that actually need it,” Biggs said in a written statement.

The Fish and Wildlife Service currently lists 1,459 species of wildlife considered at risk of extinction in the United States, from the red wolf to the Kemp’s ridley sea turtle to the Northern sea otter. Classifications include endangered, threatened, and experimental populations.

Biggs so far has 23 co-sponsors, predominantly from Midwestern states. No Democrat has signed on as yet.

The Trump administration has begun to push related reforms through the Interior Department. The Western Governors Association, meeting last month, advanced its own version of bipartisan reforms. Wyoming Gov. Matthew Mead, a Republican, has been a leader in the effort.

Biggs told The Daily Signal that some environmental groups want to take control of private property and economic activity in the name of defending a species, and that such groups “don’t want to delist species that have come back.”

Some colleagues on the other side of the aisle have given the “usual diatribe” about proposed reforms, Biggs said, arguing that he and other Republicans are “out for the big bucks and don’t care about animals.”

But Rep. Kurt Schrader, D-Ore., has co-sponsored certain measures in the package of bills.

Other Democrats “don’t want to give in on environmental issues at all,” Biggs said.