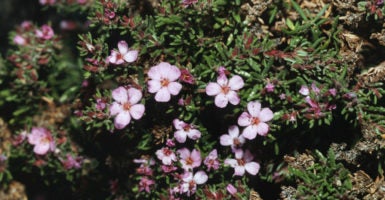 The Fish and Wildlife Service listed Johnston's frankenia as an endangered species for over 30 years despite clear evidence to the contrary. (Photo: J. Flohe/picture alliance/blickwinkel/J/Newscom)

Leave it to the federal government to make a costly mistake, obscure it for decades at taxpayer expense, and then try to claim it was a success.

In 2016, Johnston’s frankenia—a wiry, blue-green, roughly 1 to 2-foot-tall shrub with tiny oblong leaves—was taken off the endangered species list. The Fish and Wildlife Service’s endangered species database reports the happy plant was “delisted” because it had recovered.

It seems strange that such good news did not get much attention, and that the Fish and Wildlife Service only put out a press release in the southwestern U.S.

The reason it was not more publicized is probably because the whole thing is a farce. The species did not recover—it never was endangered in the first place.

When the Fish and Wildlife Service added this plant to the endangered species list in 1984, the agency reported it could only find about 1,000 of them in a few southern Texas counties, and that there was concern about “grazing pressure” on the hapless plant.

But surveys conducted after 1984 found a wealth of Johnston’s frankenia—over 4 million by one account and over 9 million by another—enough that biologists probably quit trying to guess.

The Fish and Wildlife Service hailed the “recovery” of the plant, saying, “The threats to this species have been eliminated or reduced to the point that the species has recovered … ”

That sounds a lot like a doctor claiming his patient is cured after realizing a terminal diagnosis was totally wrong.

When the Fish and Wildlife Service removes a species from the list, it is to attribute the action to either recovery, data error, or extinction. It’s clear Johnston’s frankenia was never “recovered” because it was never in desperate condition at all.

The Fish and Wildlife Service’s annual expenditure reports indicate that $670,000 were spent on Johnston’s frankenia between 1998 and 2014 alone. This includes nearly $250,000 shelled out by Customs and Border Protection in 2008 in order to avoid adversely affecting the plant.

Even more troubling than the expenditures is the fact that the government knew the plant was just fine when it made them. I know this because I petitioned the Fish and Wildlife Service to remove the species from the list as a mistake in 1997, citing data familiar to the service.

A half-decade later in 2003, the Fish and Wildlife Service finally announced a proposal to delist the species, stating that it was “not able to act on this petition upon receipt due to the low priority assigned to this activity … ”

The effort to deregulate the plant somehow ground to a halt until the Fish and Wildlife Service announced in 2011 that it was reopening the public comment period on the proposal to take this species off the list.

By January of 2016, the Fish and Wildlife Service finally removed the plant from the endangered list.

It took the agency decades to correct this mistake, and when it finally did, it was dishonest.

Because the Fish and Wildlife Service calls the plant “recovered,” it is required to monitor the species after taking it off the list. This requirement was intended to make sure species that actually belonged on the endangered list don’t slip back into an imperiled state.

The Fish and Wildlife Service has a 28-page monitoring plan that explains how the agency will keep a vigilant watch over the frankenia. It will spend $100,000 over nine years to conduct remote sensing at 20 sites and on-site assessments at nine sites.

And, as explained in the Federal Register, the Fish and Wildlife Service will make sure that threats, including “substantial human persecution,” are not visited upon the plant.

Of course, this is all an absurd waste. These measures do nothing but paper over the agency’s decadeslong mistake.

But after promulgating dozens of pages in the Federal Register costing perhaps $500 a pop, producing a 55-page recovery plan, and imposing hundreds of thousands of dollars on agencies that have other important things to do, what’s another nine years of monitoring to hide embarrassing facts from the public?

The Fish and Wildlife Service’s press release regarding removal of the plant from the endangered species list states, “The goal of the service is to make implementation of the Endangered Species Act less complex, less contentious and more effective.”

Nice idea—but how does the service now expect to have any credibility with landowners whose role in species conservation is crucial?

Smart public policies cannot be made when the government is producing patently fake information. The secretary of the interior should correct the record for Johnston’s frankenia.