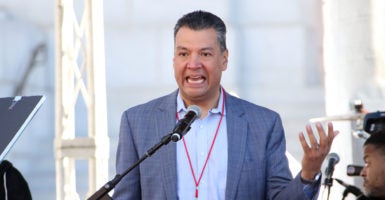 Proposition 9, which would divide the state of California into three separate states, has been struck down by the Supreme Court of California. Pictured: Secretary of State of California Alex Padilla speaks in Los Angeles, California, on Jan. 20. (Photo: JC Olivera/Sipa USA/Newscom)

Proposition 9, which qualified for the November ballot with 402,468 signatures on June 12, would have appeared on the ballot in the general election, but will no longer be an issue residents of the state can vote on, according to ABC News.

The Planning and Conservation League, an environmental organization, opposed this measure and sued California Secretary of State Alex Padilla and Cal 3 founder and venture capital investor Tim Draper on July 9. The organization believes the initiative would in effect abolish the state constitution, something that cannot be lawfully enacted by a ballot measure vote, according to ABC News.

“Proposition 9 was a costly, flawed scheme that will waste billions of California taxpayer dollars, create chaos in public services, including safeguarding our environment, and literally eliminate the State of California—all to satisfy the whims of one billionaire. We are thankful for the opportunity to save Californians from having to vote on a billionaire’s folly,” Howard Penn, executive director of the Planning and Conservation League, said in a statement, according to The Sacramento Bee.

The California Supreme Court order revealed in the ruling “significant” concerns over validity. “The potential harm in permitting the measure to remain on the ballot outweighs the potential harm in delaying the proposition to a future election,” justices wrote Wednesday.

Draper, who started Cal 3 in August 2017, said the proposal—if put in effect—would have helped the education system and state infrastructure, and decreased taxes, according to ABC News in June. He argued California had become too large to govern effectively, according to The Associated Press.

“The whole point of the initiative process was to be set up as a protection from a government that was no longer representing its people. Now that protection has been corrupted,” Draper said in a statement on Facebook Wednesday.