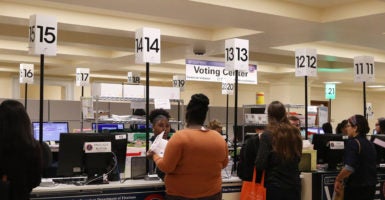 San Francisco has announced that noncitizens can vote in its Board of Education elections. Pictured are poll workers giving assistance to voters at a polling station in the City Hall of San Francisco on Nov. 8, 2016. (Photo: Chine Nouvelle/SIPA)

Noncitizens can vote in San Francisco’s Board of Education elections after the city’s Department of Elections ruled Monday to do away with citizenship requirements.

Noncitizens seeking to vote in San Francisco’s Board of Education elections must be at least 18 years old and residents of the city, CBS SF Bay Area reported Monday. They must also be parents, caregivers, or legal guardians of children under 19 years old who reside in the city.

Those serving time for a felony conviction, as well as those persons on parole for a felony, cannot vote in the city’s Board of Education elections. Those deemed by the court to be mentally incompetent are also barred from voting in the elections.

The new requirement comes after San Francisco voters passed local Proposition N, allowing noncitizens to vote in education elections. The proposal passed 54 percent to 46 percent and will continue taking effect until 2022, wherein the Board of Supervisors will have to decide whether to preserve or abandon the law.

Up until the 1920s, a number of states, cities, and municipalities allowed noncitizens to vote in elections as long as they were residents of that city, state, or municipality.

San Francisco is the first California city to allow noncitizens to vote in its Board of Education elections.

Other cities also allow noncitizens to vote in school board elections. Cambridge, Massachusetts, along with Chicago extend the privilege to noncitizens. A number of Maryland municipalities also do so.

Voters will cast their ballots in San Francisco’s Board of Education elections on Oct. 22.