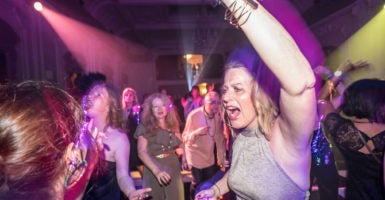 A study has shown that heavy drinking is linked to aggressive behavior. Pictured are partygoers at the Sheene Resistance's Lost in Disco Night at Bush Hall in London, England, on May 20. (Photo: Richard Gray/ZUMA Press/Newscom)

The government has spent nearly $3 million studying people who drink and become aggressive at nightclubs since 2014, and found, among other things, that heavy drinking is linked to aggressive behavior.

The National Institutes of Health has provided $2,897,322 to the Pacific Institute for Research & Evaluation for a series of studies on “group-based intervention for alcohol, drugs, and aggression among club patrons.”

The project “targets young, working adults who frequent clubs that feature Electronic Music Dance Events (EMDE) and engage in high risk behaviors”—like heavy drinking and other drug use, according to the grant description, first reported by The Washington Free Beacon.

A description for the most recent grant of $180,304, awarded in May, sought to see whether high-risk behaviors like “excessive alcohol use, drug use, physical and/or sexual aggression, and unsafe behaviors upon exiting from clubs” could be reduced by “group-based intervention.”

“The research would test a brief, group-based intervention to reduce these high risk behaviors common in clubs,” the description of the project says.

The study’s author intended to study the effects of approaching groups of young people at club events and attempt to reach them and implement the three “O’s,” defined as “Outreach—approach fellow members who are at risk … Options—to suggest alternatives that would increase safety and … Out—to increase awareness when it is time to leave.”

A summary of the project from 2016, which studied data collected from 38 events at eight different San Francisco, California, nightclubs, found that when groups or individuals experienced more aggressive behavior from other club patrons, they drank more than they had planned.

On the other hand, the researchers found that “groups that had higher levels of planned intoxication decreased risks of experiencing aggression, while a discrepancy in these intentions among group members increased the risks.”

But on the whole, “Heavy drinking behaviors are also linked to aggression,” the researchers found.

The study also found that “among college students, being a recipient of aggressive behavior while drinking has been linked to being female, a younger age, and belonging to a Greek organization.”