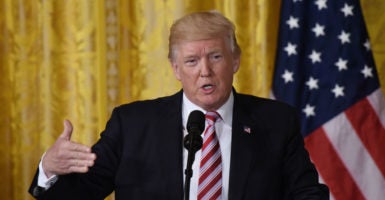 If you haven’t heard many details about the latest proclamation signed by President Donald Trump, it’s probably because critics—including media—don’t want anyone reading it.

Why? Because contrary to their irrational claims, this lawful order represents common sense on national security issues vital to our safety.

As James Carafano, vice president for foreign and defense policy studies at The Heritage Foundation, points out, it is “right in line with what the U.S. has consistently done to thwart terrorist travel since 9/11,” implementing a “risk-based” approach to evaluating prospective entrants.

The detailed contents of the proclamation make it obvious that this has nothing whatsoever to do with “discrimination” against Muslims, the false charge constantly heard about the president’s travel orders.

The original executive order issued by the president temporarily suspended the entry of aliens from seven terrorist safe havens in the Middle East and Africa for 90 days, so that the federal government could do an intensive review of the vetting used to screen aliens.

The point was to make sure we have the procedures needed to prevent terrorists from entering the country as tourists, students, or immigrants. One of those counties, Iraq, was dropped in the revised order issued in March after negotiations with its government.

The Sept. 24 proclamation describes the intense, comprehensive review undertaken by the Department of Homeland Security during that 90-day period to ensure that we are receiving all of the information that “would be needed from each foreign country to assess adequately whether their nationals seeking to enter the United States pose a security or safety threat.”

This was “the first such review of its kind in United States history.” Homeland Security developed a “comprehensive set of criteria” that it applied to 200 countries to evaluate “the information-sharing practices, policies, and capabilities of foreign governments.”

Homeland Security identified 47 countries that were either “inadequate” or “at risk” of becoming inadequate. It then spent 50 days “engaged with the countries reviewed in an effort to address deficiencies and achieve improvements.”

Many foreign governments agreed to “formal commitments” to provide better information. As a result, Homeland Security “improved its capacity and ability to assess” the security threat posed by aliens attempting to enter the U.S.

This review didn’t just involve getting better information from other countries, but also evaluating “the integrity of documents” provided. It seems obvious, for example, that we can’t trust identity and travel documents from a government that is a State Department-designated sponsor of terrorism like Iran.

The end result of this wide-ranging and thorough review is a new list of eight countries, five of which were on the original list. Those five include Iran, Libya, Syria, Yemen, and Somalia.

Iran and Syria are state sponsors of terrorism, and Libya, Yemen, and Somalia are “countries of concern” because of extensive terrorist activities inside the countries. Chad, a country with several active terrorist groups including, Boko Haram, ISIS-West Africa, and al-Qaeda, has been added to the list.

Those who keep falsely asserting that this is just an anti-Muslim crusade will have a hard time explaining why North Korea and Venezuela have been added to the list, neither of which is majority-Muslim.

North Korea is an obvious addition, given the dangerous tyrant who runs the country and the fact that it “fails to satisfy all information-sharing requirements” according to the proclamation.

Venezuela is “uncooperative in verifying” any information. Therefore, the entry of certain government officials from that country is being restricted. Although Iraq is not specifically listed, the proclamation does say that Iraqi nationals will be “subject to additional scrutiny.”

Entry of aliens from these eight countries is suspended, except for aliens who meet certain criteria. That includes aliens who are lawful permanent residents of the U.S., have been granted asylum, are refugees already admitted to the U.S., are dual nationals traveling under a passport from a nondesignated country, or are diplomats.

Homeland Security will also grant case-by-case waivers to aliens who either have family in the U.S., significant contacts through business, professional obligations (including as students or employees), need urgent medical care, or have other “special circumstances” justifying their entry.

Again, all of this is common sense. It is hard to understand how anyone could rationally claim that the president is acting in an arbitrary, capricious, or discriminatory manner in taking these actions after Homeland Security conducted its historic and thorough review of our alien entry process.

On Monday, the day after the proclamation was issued, the Supreme Court canceled the oral arguments scheduled for Oct. 11 in the multiple lawsuits filed against the president’s previous travel orders.

The court told the parties to file supplemental briefs explaining whether the new proclamation moots the lawsuits. Those briefs are due by Oct. 5.

In this case, the court should dismiss the challenges to the travel orders on the merits and recognize that the president has acted fully within his constitutional authority—and his duty—to safeguard the nation and our borders.