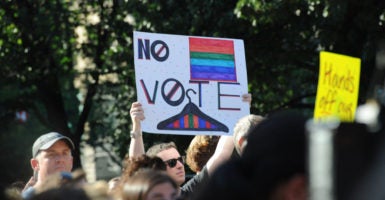 President Donald Trump’s nominee for the Supreme Court, Judge Brett Kavanaugh, is now making the rounds in the Senate in advance of his confirmation hearings. Kavanaugh is the kind of jurist that our system of government was designed for: fair, impartial, and faithful to the Constitution.

Many far-left groups, and therefore, many Senate Democrats, will oppose Kavanaugh because they oppose the kind of justice he will be. Their quest for a political judiciary leads to wild claims that this appointment will bring on the Apocalypse and determine the destiny of humankind.

One Democratic senator, for example, exclaimed at a rally that “the future of America is at stake.” It’s really not.

In other words, the left wants judges with certain personal views who will produce certain results on policy, even if that requires taking a side before even considering a case or the legal arguments presented.

Kavanaugh’s opponents are fighting his nomination because he is not their kind of judge. Instead of acting in a political manner, he is impartial. Instead of relying on his personal views, he decides cases by looking to the law as written. Instead of favoring one party over another or considering how his decisions will serve certain political interests, he applies the law fairly across the board.

Kavanaugh’s opponents know that the American people’s basic common sense tells them that our country needs impartial rather than political judges. But the left also knows that the American people know too little about how our system of government, especially the judiciary, actually works, and they have their playbook for how to exploit that lack of understanding.

The left, for example, has offered dire predictions for nearly 40 years about the fate of Roe v. Wade and the possible consequences from its reversal every time a Republican president makes a Supreme Court nomination. It believes it can get away with it because most Americans don’t understand what the Supreme Court actually concluded in Roe v. Wade.

Kavanaugh, however, is not running for Congress or state insurance commissioner. He has been nominated to be a Supreme Court justice and, thankfully, he understands what that really means. He knows that the law, not the judge, must determine the winner in each case, and that judges must be fair, impartial, and faithful to the Constitution—no matter which side wins.

Believe it or not, it was Justice Ruth Bader Ginsburg who offered the best job description for a judge. At her confirmation hearing in July 1993, she said that judges “are bound to decide concrete cases, not abstract issues. … A judge sworn to decide impartially can offer no forecasts, no hints, for that would show not only disdain for the specifics of the particular case, it would display disdain for the entire judicial process.”

Kavanaugh’s opponents reject Ginsburg’s description of how judges should approach cases. Whether it’s abortion, Obamacare, the Mueller investigation, or any number of other issues that are sure to pop up in the coming weeks, the left wants people to believe that judges are in charge and call the shots.

It will, in Ginsburg’s words, require that Kavanaugh “display disdain for the entire judicial process” by giving not just hints and forecasts, but actual commitments about how he will decide certain cases in the future.

Misleading people about how their system of government works, however, only undermines the people’s ability to participate in it and weakens our impartial and independent judiciary.