‘Roe V. Wade’ Film Director Describes How Hard It Was Shooting a Film About Abortion 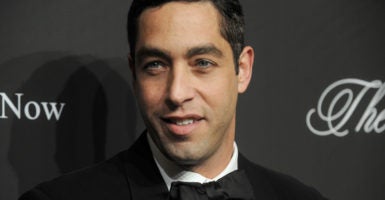 Nick Loeb, who gained notoriety after fighting with ex-fiancée and “Modern Family” star Sofia Vergara over frozen embryos, is co-directing a pro-life film set to hit theaters in January 2019, according to The Hollywood Reporter.

The filming hasn’t been particularly easy, however, with cast and crew facing expulsion from set locations and actors wavering on their roles after receiving backlash from friends and family. Loeb recalls that one woman approached him asking him who he was. “When I told her who I was, she told me to go f— myself,” Loeb told The Hollywood Reporter. “Then she threw her headset on the ground and walked off.”

The pro-life feature film began shooting June 15 and major cast members as well as shooting locations have not been revealed in order to protect the cast and crew. Not all roles are hidden however, with conservatives Jon Voight and Robert Davi playing Supreme Court justices in the film.

Loeb shared that shooting for the movie has been difficult, especially when filming locations changed their mind about hosting the film crew. Louisiana State University “rejected [us] due to our content, even though it will be a PG-rated film,” Loeb said. “They refused to put it in writing, but they told us on the phone it was due to content.”

Tulane University allowed the film crew to shoot for one day only after learning about the pro-life nature of the upcoming movie. A New Orleans synagogue even kicked the crew out after they discovered the nature of the film. “Once they found out what the film was about, they locked us out. We had to call the police so that the extras and caterers could retrieve their possessions,” Loeb said.

Casting posed it challenges as well, Loeb disclosed, noting that three local actors were replaced during filming because they backed out after pressure from friends.

The film comes after Justice Anthony Kennedy announced his retirement from the Supreme Court on Wednesday. Kennedy, who former President Ronald Reagan appointed, served on the Supreme Court for 30 years and spearheaded major decisions on abortion, gay rights and the First Amendment. The justice was lauded as the Democrats’ last hope on an otherwise conservative court, and his resignation has been met with complaints from the left.

Conservatives have applauded Kennedy’s resignation as a chance stack the Supreme Court with conservative justices and overturn Roe V. Wade giving women the right to abortion.