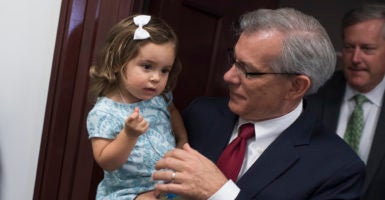 Pictured is Rep. David Schweikert with his daughter, Olivia, at the Capitol on June 21, 2017. (Photo: Tom Williams/CQ Roll Call/Newscom)

Republican Arizona Rep. David Schweikert says he received more death threats in 2017 than every other year he’s been in office combined.

“My fear is this is the playbook of a lot of our brothers and sisters on the left—they’re going to get fringier and fringier, louder and louder, angrier and angrier, and as you and I know, we sometimes have some folks in our society who aren’t completely healthy,” Schweikert said while appearing on “Plaidcast,” a podcast hosted by Republican Rep. Sean Duffy of Wisconsin.

“And we had more death threats last year, in my office, even one towards my little girl, than we’ve ever had in all the other years combined and my fear is that this rage that is being generated for political turnout is actually really becoming unhealthy for our political society,” Schweikert continued.

The Arizona congressman has served in Congress since 2011.

“It’s incredibly troubling, because I’ve had threats against my family and my children as well—horrible things said,” Duffy agreed. “We know what happened to [House Majority Whip] Steve Scalise last year and our baseball team and with that, I don’t think the left recognizes that this isn’t the way the system was set up.”

“We’re supposed to debate, we’re supposed to argue, and we can be passionate, but then we go vote and we have elections and after we have winners we kind of step back and let them govern,” Duffy said.

“There’s an absolute attempt to dehumanize anyone who disagrees, and particularly the rage is off the charts right now because our philosophy is actually working,” Schweikert said, adding that he believes the success of the economy is forcing Democrats to dehumanize Republicans for political purposes.

“If you can’t win by facts and the arguments and the proof is just outside these doors, then you have to dehumanize those of us who are on the more conservative side,” he said.

Schweikert’s comments come just about a year after a left-wing Bernie Sanders supporter attempted a mass assassination of Republican congressmen in June 2017.

Democratic California Rep. Maxine Waters sparked controversy on Saturday when she encouraged liberal mobs to harass members of President Donald Trump’s administration at restaurants, gas stations, and even at home.

“Already you have members of your Cabinet that are being booed out of restaurants … protesters taking up at their house who are saying, ‘No peace, no sleep. No peace, no sleep,’” Waters said, pledging to “win this battle.”

“If you see anybody from that Cabinet in a restaurant, in a department store, at a gasoline station, you get out and you create a crowd,” the congresswoman added. “And you push back on them. Tell them they’re not welcome anymore, anywhere.”

Democratic leaders in Congress have attempted to distance themselves from Waters’ comments.