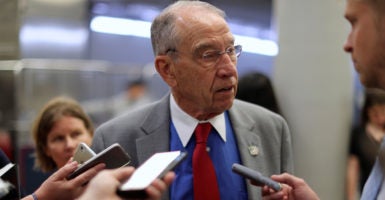 “I am glad that President Trump has [made] cutting the regulatory burden one of his top priorities, but lasting reform is going to require some significant structural changes,” Sen. Chuck Grassley, R-Iowa, says. (Photo: Jonathan Ernst/Reuters/Newscom)

The chairman of the Senate Judiciary Committee says that robust congressional oversight is needed to govern well and keep each branch of government in check.

“Today we live under a government … that is no longer governed by congressional action, enforced by the president, and interpreted by the courts,” Sen. Chuck Grassley, R-Iowa, said in remarks on the role and responsibility of congressional oversight delivered Monday at The Heritage Foundation.

The Iowa Republican, first elected to Congress in 1974, said both sides of the aisle are to blame for the increases in regulation and red tape in government.

“We cannot blame political ideology,” Grassley, 84, said. “Under Democrats and Republicans, the administrative state has only expanded, and has [done so] at the expense of congressional authority and prestige.”

Grassley said the effectiveness of the Constitution’s separation of powers is lessened when government is left to bureaucrats:

We have sacrificed our constitutional mandate on the twin altars of efficiency and expertise. We have moved from a government by and for the people to government by the bureaucrats and for the connected insiders.

The Iowa lawmaker said the current administrative state should be placed in check:

The modern administrative state is a good deal for Congress, which can pass bills with lofty goals and take credit while agencies sort out the details that Congress doesn’t want to deal with, or doesn’t know how to deal with.

It also is a good deal for special interests and well-connected corporations who can afford to sort through scores of regulations published each year, an advantage the small business doesn’t have.

“It is no wonder there are more than 180,000 pages of administrative regulations,” Grassley said. “I am glad that President Trump has [made] cutting the regulatory burden one of his top priorities, but lasting reform is going to require some significant structural changes.”

Trump has used the Congressional Review Act at least 12 times (it previously had been used only once) to repeal regulations within a certain window of time. In December, the White House said that agencies took “22 deregulatory actions for every one new regulatory action.”

“More than 2 million people work for the federal government. That does not even include contractors and active-duty military personnel,” Grassley said. “According to a 2015 study, the actual size of the government workforce is estimated at more than 9 million.”

The Senate Judiciary Committee chairman said Congress must adhere to the Constitution and the will of the American people to take power away from bureaucrats and work for the best interests of citizens.

“Congress needs to exercise more scrutiny over taxpayers’ money, not less,” Grassley said. “The more we tip the constitutional scale, the less accountable government will be to the people, who are sovereign.”