Fauci Must Explain Why Oversight Bypassed for Funding to Wuhan Lab, Congressman Says 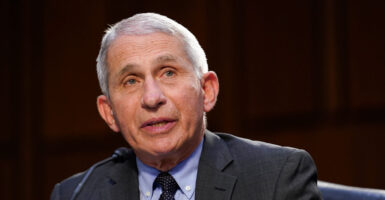 Infectious disease experts say the National Institutes of Allergies and Infectious Diseases’ grant to the nonprofit group EcoHealth Alliance, which involved the transfer of $600,000 to the Wuhan Institute of Virology, described scientists conducting “gain-of-function” research on SARS-like viruses to make them even more contagious.

But a federal oversight board created in 2017 to scrutinize such research was not notified of the grant because the National Institutes of Allergies and Infectious Diseases opted against forwarding it for review, The Daily Caller News Foundation previously reported.

“When it comes to oversight of U.S. tax dollars headed to the Chinese Communist Party, Dr. Fauci seems like he’s literally whistling past the graveyard,” Perry told The Daily Caller News Foundation.

The Wuhan Institute of Virology is at the center of widespread speculation that COVID-19 could have accidentally leaked from its lab into the human population. A World Health Organization investigation into the origins of the pandemic concluded in late March that it was “extremely unlikely” that the virus could have escaped from a lab.

But WHO Director-General Tedros Adhanom Ghebreyesus said his organization’s assessment of the lab leak theory was not sufficient and that further investigation was necessary.

Had the EcoHealth grant been subjected to so-called P3CO review, an HHS panel would have evaluated the grant independently and, if necessary, recommended additional biocontainment measures to prevent potential lab leaks—or even recommended that the grant be denied entirely.

A Rutgers University professor of chemical biology, Richard H. Ebright, previously told The Daily Caller News Foundation that the National Institutes of Allergies and Infectious Diseases’ ability to sidestep the P3CO framework is a “systemic problem.”

Ebright said that Fauci’s office as well as the larger National Institutes of Health “systematically thwarted—indeed systematically nullified—the HHS P3CO framework by declining to flag and forward proposals for review.”

EcoHealth President Peter Daszak, the only American member of the World Health Organization delegation investigating COVID-19’s origins, spoke about how easy it was to manipulate bat-based coronaviruses during a podcast interview filmed just weeks before the first cases were reported in Wuhan.

An NIH spokesperson previously told The Daily Caller News Foundation that the National Institutes of Allergies and Infectious Diseases did not flag the EcoHealth grant for independent review because it did not meet the framework’s definition of gain-of-function research.

Perry, a member of the House Foreign Affairs Committee, said he will call for Fauci to testify about why his agency did not flag the EcoHealth grant for P3CO review:

We seem so cavalier about this approval paradigm for this funding and the definitions seemingly allow you to drive a truck through them regarding what is gain-of-function research and what isn’t. It seems to me this was done by design to allow this kind of research to be done in these kinds of places without any kind of scrutiny. And this is the result of that.

Perry said there is a great deal of interest among his Republican colleagues to probe the federal government’s funding of gain-of-function research in China. He added that he wasn’t optimistic that Democrats, who control the House, would allow such a hearing.

“I won’t be surprised after requesting to bring these folks in as witnesses, have an open hearing about it, that those things fail to ever occur. I won’t be surprised,” Perry said. “In the minority, we can’t force it. If they’re not going to allow it or to pursue it, then it just won’t happen in the House side.”