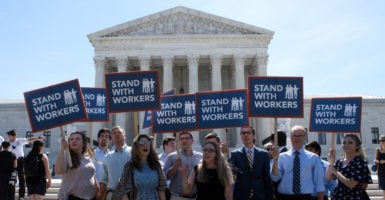 Pictured are supporters in the Janus v. AFSCME case in front of the Supreme Court on June 25, 2018. (Photo: Evan Golub/Zuma Press/Newscom)

Public-sector workers are preparing class action lawsuits against the unions they have been forced to pay dues to pending the outcome of a U.S. Supreme Court case, The Washington Free Beacon reports.

The court is expected to issue a decision on Janus v. American Federation of State, County, and Municipal Employees (AFSCME) in a matter of days. Depending on the ruling, millions of public-sector workers could be exempted from paying “agency” fees to unions they are not members of.

In effect, the case is a rehearing of Friedrichs v. California Teachers Association, which the court split 4-4 on last year after the death of late Justice Antonin Scalia. Justice Neil Gorsuch was appointed and confirmed to replace Scalia and is expected to rule that mandatory “agency” fees are unconstitutional.

Class action lawsuits have been filed against eight public-sector unions, so far, accusing the unions of violating workers’ right to free speech through forced dues used to lobby the government, according to the Free Beacon.

The unions’ lobbying influenced the wages, benefits, and workplace conditions of millions of government employees. If successful, the lawsuits could result in each union being held responsible for years of back-pay owed to union members who have been paying dues against their will.

“As we’ve seen in assisting workers exercise their rights in new right-to-work states, union bosses will fight tooth and nail against letting [them] exercise their rights to stop funding a union they disagree with,” National Right to Work Foundation spokesman Patrick Semmens told the Free Beacon. “So we expect that a Supreme Court ruling for Mark Janus will likely make necessary numerous new cases brought by state workers across the country seeking to enforce their First Amendment rights.”

A union threatened with a lawsuit in case of union defeat in the Janus case, Education Minnesota, hit back against the potential litigants, calling the lawsuit a part of a larger coordinated attack on unions nationwide.

“For the past few years, a few immensely wealthy individuals have paid for a national campaign against the rights of working people to organize and work in union,” Education Minnesota President Denise Specht said in a statement. “Education Minnesota always complies with the law, and the collection of fair-share fees has been legal and beneficial for the tens of thousands of educators who worked in better schools, with smaller classes, and for more pay than they would have without their union.”

Unions are also preparing for the outcome of the Janus case. Unions are taking steps to try and keep their membership lists out of reach from the public, though the information is all public record. Right-to-work groups are after the membership rolls to launch a public information campaign telling workers of their newly secured rights should the Supreme Court rule against “agency” fees.

Unions are also attempting to hold on to their current members by locking them into longer union contracts that are “irrevocable” for around a year, usually. Other union contracts give new signees an “opt out” window, sometimes as short as 10 days, for union members to opt out of their new contracts once signed.