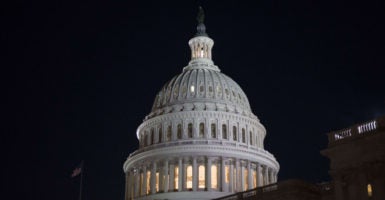 Mandatory spending and interest on the debt totaled about 70 percent of the federal budget in 2017. (Photo: Alex Edelman/SIPA/Newscom)

The Senate needs to follow suit to unlock those savings and begin taking the nation down a saner fiscal path.

The federal government ran a $665 billion deficit in fiscal 2017. This year, our national debt surpassed $21 trillion. The Congressional Budget Office projects that the government will return to annual trillion-dollar deficits by 2021 and that by 2028 the debt held by the public will reach 91 percent of gross domestic product.

Regardless of political affiliation, it’s commonly agreed that this fiscal path is unsustainable and getting worse over time. Unfortunately, Congress as a whole shows no sign of taking the nation’s looming fiscal crisis seriously.

In March, Congress passed a $1.3 trillion omnibus spending bill that increases unsustainable deficit spending and puts the nation on an even worse fiscal path. In yet another blow to fiscal conservatives, President Donald Trump’s rescission request to claw back a modest $15 billion in spending from outdated budget accounts failed in the Senate.

Spending on these programs will only increase as more and more baby boomers retire.

Notably, spending on mandatory or entitlement programs is excluded from the annual appropriations process. The programs increase on autopilot, driven by eligibility criteria and other cost factors, without regular congressional review.

Congress regularly appropriates funds only for the so-called discretionary portion of the budget. Far from an “optional” category, discretionary spending includes national defense—a core constitutional function of the federal government. Other categories include education, transportation, and foreign aid expenditures.

The Heritage Foundation’s “Blueprint for Balance” provides a long list of proposals to rein in spending through annual appropriations and to pursue conservative policy priorities through legislative riders.

Even though discretionary spending is neither the largest nor fastest-growing part of the budget, Congress should seize these opportunities to reduce duplication and waste, and to devolve programs to the private sector and to state and local governments, where they can be more effectively managed. 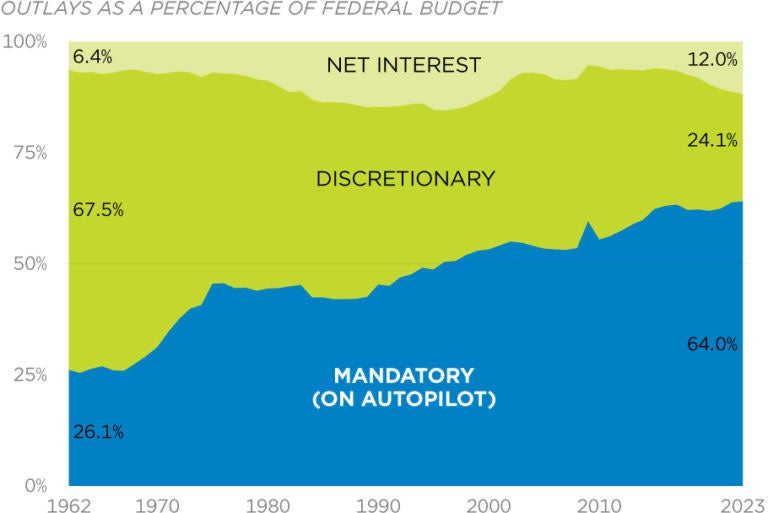 Mandatory spending and interest on the debt totaled about 70 percent of the federal budget in 2017. The Office of Management and Budget projects that by 2023, it will consume more than three-quarters of the budget.

As autopilot spending devours more of the federal budget, core national priorities, such as national defense, are feeling the squeeze. The growing mandatory spending will make sustaining the recent increase in defense spending very difficult.

That’s alarming, as national security threats have worsened over the past decade with the rise of ISIS, North Korean nuclear testing, and Russian aggression. 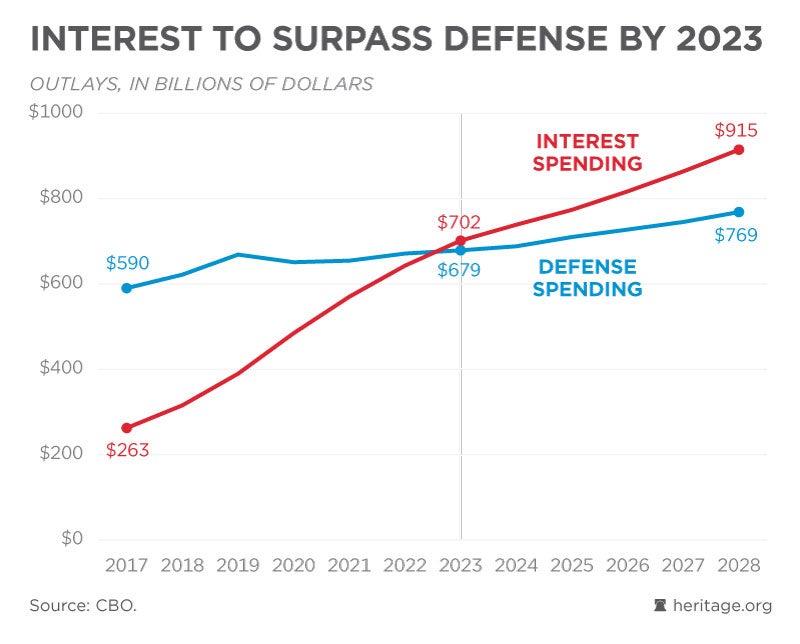 This out-of-control spending also puts the tax cuts from the Tax Cuts and Jobs Act of 2018 at risk. Portions of the Reagan and Bush tax cuts were reversed because of large deficits. Trump’s tax cuts could suffer a similar fate.

One promising proposal is a spending cap that applies to all noninterest expenditures and that is enforced by sequestration, if necessary. Paving the way for such a cap should be a key goal of the joint committee for appropriations and budget process reform.

The Budget Control Act failed to rein in overall spending because it only applied to discretionary spending—largely protecting popular programs, such as Social Security and Medicare, from spending reductions.

The most effective spending cap should achieve a balanced budget by the end of the decade while Congress pursues a balanced-budget amendment to the Constitution to lock in the gains from a responsible path to balance.

By applying spending caps to mandatory and discretionary spending, lawmakers will face a choice whether to deliberately reduce spending and enact meaningful entitlement reforms, shoulder indiscriminate cuts across the board, or confront public shame for undermining their fiscal commitment out of political expedience.

All of that requires a fiscal commitment in the first place.

Washington can begin to break its addiction to spending and adopt meaningful budget reforms by pursuing reconciliation of mandatory spending programs, as laid out in the House plan, and by leveraging the joint committee for appropriations and budget process reform to pursue substantive fiscal restraints.