6 Highs and Lows of the House Budget Proposal for 2019 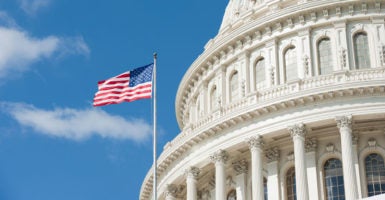 The House Budget Committee this week unveiled its fiscal 2019 budget proposal, and the most important aspect is that it provides reconciliation instructions to authorizing committees to find more than $300 billion in mandatory spending cuts.

More than two-thirds of the federal budget consists of mandatory spending, which is not subject to the annual appropriations process. Reconciliation provides the best opportunity to reform those programs, which drive spending and debt.

It’s imperative that Congress adopt a budget and pass reconciliation legislation this year.

Beyond setting forth a policy agenda, the House budget is a powerful tool because it can unlock the reconciliation. Reconciliation allows for the expedited consideration of bills affecting spending, revenue, and deficit levels and can pass in the Senate with just 51 votes.

This year’s House budget calls for $302 billion in mandatory spending cuts, to be achieved through reconciliation—$99 billion higher than the Budget Committee’s last proposal. This is more than 20 times higher than the rescissions package that recently passed the House, but was defeated Wednesday in the Senate.

Reconciliation is the best and perhaps only path toward getting major spending and tax reforms enacted this year. It is a tool that Congress should use every year.

2. Balances the budget in less than 10 years.

Since Republicans took control of the House in 2010, balancing the budget within 10 years has been a recurring theme of budget proposals.

The fiscal 2019 budget would continue to meet that goal, reaching balance in nine years and cutting spending by $6.5 trillion. The budget assumes that dynamic feedback effects from deficit reduction and better-than-expected economic growth would reduce the deficit by an additional $1.6 trillion.

In total, the proposal would reduce the deficit by $8.1 trillion and put the national debt on a declining path.

President Donald Trump’s fiscal 2019 budget abandoned the goal of balance. With the Congressional Budget Office’s latest projections showing that the budget is on an abysmal path, now more than ever Congress should pass a balanced budget that corrects the unsustainable budget course.

The House budget would provide more than $7.1 trillion in funding for national defense in the next decade. In total, it would provide $751 billion in new defense spending above the CBO baseline.

The proposal would also phase out additional uncapped spending for the global war on terrorism. That funding has far too often been used improperly to increase base Department of Defense and State Department budgets.

While additional defense spending is necessary and proper, it should not come at the cost of the Budget Control Act spending caps. This budget sticks to the irresponsible spending increases enacted by the Bipartisan Budget Act of 2018 for fiscal year 2019, and then breaks the spending caps by $226 billion from 2020 through 2021.

Instead of busting the Budget Control Act caps, the budget should fully pay for defense spending increases through cuts to nondefense discretionary programs.

There are countless nondefense programs that are wasteful and do not meet the core constitutional responsibilities of the federal government. The Heritage Foundation’s Blueprint for Balance highlights $106 billion in nondefense cuts that could be made in 2019 alone.

The House budget proposal takes a step in the right direction by initiating reforms to Medicare and Medicaid. The budget saves more than $2 trillion over the next decade through changes to health care programs.

The program is unsustainable in its current form, and continuing to delay reforms will put an increasing strain on the overall budget, as Social Security’s cash-flow deficits further balloon.

6. Relies on optimistic savings and fails to eliminate budget gimmicks.

The budget includes $700 billion in savings through the elimination of “improper payments.” Those are payments that should not have been made or were made for the wrong amount.

The Government Accountability Office estimates that in 2015, the federal government spent more than $136 billion through improper payments. Reducing improper payments is a worthy endeavor; however, the level of savings assumed by the House budget is unlikely.

The CBO assumes that some money will have to be spent to reduce improper payments, and the return on that investment is about 1.5 to 1. The president’s 2019 budget assumed a more conservative $151 billion in savings from reducing improper payments.

The budget limits the amount of Changes in Mandatory Programs that can be used as savings in 2019 and 2020, but it is unclear what happens after that.

Congress should immediately take steps to stop the use of Changes in Mandatory Programs and other budget gimmicks.

In short, the federal budget is on an unsustainable path. Congress cannot afford to delay reforms any longer and should adopt a plan that reduces the reach of the federal government, puts all programs on the table for reform, and—beyond the numbers—fosters individual freedom and strengthens civil society.

The House budget would allow Congress to make significant progress toward those goals by unleashing the reconciliation process.

The proposed $302 billion in mandatory reforms would be an opportunity for Congress to offset the $296 billion in new spending enacted by the Bipartisan Budget Act of 2018.

Reconciliation is the best hope for immediate meaningful reforms. Americans cannot afford for Congress to waste this opportunity.