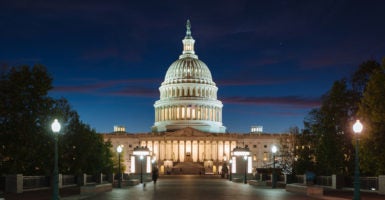 Over the next decade, the CBO projects publicly held debt will nearly double to $28.7 trillion, or more than 96 percent of gross domestic product. (Photo: erick4x4/Getty Images)

If you are looking for some grim reading, try the latest budget and economic outlook for the coming decade from the Congressional Budget Office.

It is not only that the fiscal situation is spiraling out of control, it also is happening even faster than expected. The Congressional Budget Office now expects trillion-dollar deficits to return by 2020—two years earlier than projected just last June.

The $804 billion deficit projected this year is $241 billion higher than in the last Congressional Budget Office update, and the projected 10-year cumulative deficit is now at $12.4 trillion, up from $10.1 trillion in the last report.

It is popular to blame the tax cuts passed last year for this, but tax revenue is expected to fall by only 0.7 percent of gross domestic product this year and spending is expected to climb by 3 percent of GDP.

This is not a revenue problem—the government actually is projected to take in $22 billion more in 2018 than it did in 2017. Revenues will fall to 16.6 percent of GDP from 17.3 percent this year but will be back to 17.5 percent by 2025 and will continue to climb after that.

In fact, the economic power of the tax cuts may cover some of Congress’ fiscal sins. The Congressional Budget Office projects the tax legislation will boost the level of real GDP by an average of 0.7 percent over the next 10 years and spur the economy to grow by 3.3 percent this year.

Plus, the Congressional Budget Office estimates assume Congress will let the tax cuts expire after 2025. Without permanent policy changes, people tend to just shift investments and work decisions across time rather than making the permanent increases necessary to boost long-run output levels.

The Congressional Budget Office should at the least publish an estimate of how permanent tax reform would change its projections.

It already admits its projections could be low if investment—a primary mechanism for economic growth—increases more than anticipated. One estimate from The Philadelphia Federal Reserve shows planned business investments are at levels unseen since the early 1980s.

We should expect such large business investments and other positive economic indicators to further boost the economy, although it will be slowed somewhat as these enormous deficits set in.

But make no mistake, we have a real problem on our hands. Over the next decade, the Congressional Budget Office projects publicly held debt will nearly double to $28.7 trillion—or more than 96 percent of GDP. We’ve had higher levels of debt before—the figure reached 106 percent in 1946 in the aftermath of World War II. But it was just 40 percent as recently as 2008.

There’s the Budget Control Act of 2011, which is supposed to curtail deficits by imposing limits on what Congress could spend on domestic initiatives. But Congress has voted to increase its spending limits in seven of the eight years of the law’s existence.

Those caps don’t even apply to the biggest driver of spending increases—health care, Social Security, or interest payments on the national debt. Spending is expected to grow 5.5 percent over the next decade, but health care will account for two-thirds of that.

There is no more time for delay. This level of debt is unsustainable and the economic drag it causes restricts economic growth, job creation, wage improvements, and business investment.

Congress and the president must work together to change the current fiscal path. President Donald Trump is right: We can’t do legislation like the Bipartisan Budget Act of 2018 and the Omnibus Appropriations Act, which busted the caps by $300 billion over just two years, anymore.

Spending limits for 2019 already are set, but Congress should resist the urge to ignore budgeting for that year and instead try to come in below the upper limits.

As for this year, Congress first and foremost should pass a budget resolution that includes reconciliation instructions this year.

Reconciliation, a process for moving legislation through Congress that applies only to budget bills but requires just 51 votes to pass in the Senate, offers the best path to reform. Then, the president and Congress should work together to pass legislation to claw back some of the $138 billion in increased federal spending passed in last month’s omnibus bill.

Rescissions alone will not solve the long-term debt problem, but would be a step toward reducing government waste and returning the federal government to its constitutional role. There are tens of billions of dollars in cuts that could be implemented this year.

Congress cannot afford to delay reforms. At some point our national debt will hit a breaking point, and our options for response will be limited. The time is now to begin the hard legislative work of cutting the federal bureaucracy down to size.