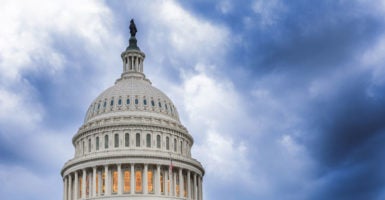 The Republican-controlled Congress has added $1 trillion to the debt so far under President Donald Trump. (Photo: uschools/Getty Images)

Fiscal restraint is dead in Washington, and no one seems to care.

The March omnibus spending deal follows through on an agreement to spend significantly more over the next two years than any Obama-era spending cap increase. Such a dramatic departure from fiscal sanity is reckless.

Unlike additional government spending, properly designed tax cuts let people keep more of their own money, allow the economy to grow, and lead to higher wages and better economic opportunities.

Tax reform’s promise was simple. American families will send an average of 2,000 fewer dollars to Washington each year—a tax cut for America.

Federal government spending is more than 20 percent of the U.S. economy, and spending consistently exceeds what the government collects in tax revenue.

This past year, the House, the Senate, and President Donald Trump all proposed budgets that cut spending growth and move the U.S. toward fiscal sanity. Each of these proposals has been successively ignored.

Instead, Congress crafts bipartisan agreements to spend more every year—reviving trillion-dollar deficits and increasing the pace at which the U.S. debt grows.

Without spending cuts, including significant reforms to entitlement spending, tax cuts only serve to make the U.S. fiscal crisis worse. However, a dearth of tax revenue is not the reason Congress has racked up $20 trillion of debt. Washington’s problem is an addiction to spending other people’s money.

Congress’ decision to reduce tax revenue and increase spending at the same time is a recipe for fiscal disaster. In fact, Congress’ new spending is projected to increase over the next 10 years by the same amount it just cut taxes, pushing the difference between revenues and spending even further off balance.

What is often forgotten in the abstract world of budget math is that Washington’s fiscal policy matters to the bottom line of every American. When the IRS takes less of your money, you have more to spend, plow back into your business, or put toward your child’s education or your retirement plan.

The economic benefits of the tax cuts are readily apparent. Unemployment is sustained at a 17-year low, and wages are rising faster than they have since 2009. Indeed, hundreds of businesses have announced raises, bonuses, and new investments directly benefiting millions of Americans.

Don’t count on the good times lasting forever. When legislators are unwilling to address out-of-control spending, they quickly look for new sources of revenue.

Every American who just received a tax cut should be a newly minted deficit hawk. Without serious spending reforms, your taxes will go back up. Congress made much of the tax cuts temporary. So unless we can reverse course, it is only a matter of time before the taxman comes knocking.

The threat of increased taxes is only the most direct impact of Washington’s opulence. Countries with unsustainable amounts of debt compared to the size of their economy—a group the U.S. is quickly joining—grow at a slower rate.

But a sluggish economic future is avoidable.

Solidified by the recent tax reform, America is in the midst of a prolonged period of economic growth and increasing prosperity. There is no reason the good news has to end. Times of sustained growth are the best time to cut back on spending to correct fiscal imbalances.

But Washington is tempting fate. Lawmakers seem to be testing the limits of economic stability by both cutting taxes and recklessly increasing spending.

If you got a tax cut and want to keep it, you should be clammering for Washington to balance the budget by cutting spending.