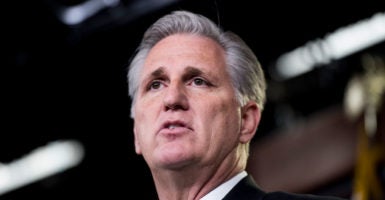 In early May, President Donald Trump submitted a rescission request to Congress to roll back more than $15 billion in spending.

The House initially seemed poised to pass the package before Congress’ Memorial Day recess, but now, CQ reports that consideration of the package will be delayed until at least June.

Congress has less than a month to take up the rescissions package before the president’s request expires. Putting it off is a mistake. This request represents the very least Congress can do to try to pare back spending and return to some semblance of fiscal restraint.

Congress should take up the president’s rescission request this week and then work with him on additional requests that target the tens of billions of dollars in inappropriate discretionary spending increases, included in the 2018 omnibus appropriations bill.

House leadership indicates that the delay is due to a lack of available floor time, but a more likely cause is that there are not enough votes to pass the rescission request. Democrats and some Republicans in Congress have balked at the idea that the request would take back funding from the Children’s Health Insurance Program (CHIP) and Ebola response, among others.

Despite the rhetoric, the rescissions package would have no impact on current CHIP funding. The nonpartisan Congressional Budget Office said so itself. The $7 billion in proposed CHIP rescissions were authorized for 2017 only and Congress no longer has legal authority to spend those funds.

The real reason that some members of Congress don’t want to rescind the CHIP funding has nothing to do with the well-being of children—the CHIP funds under consideration are often never fully spent. Instead, Congress often rescinds these funds themselves through annual appropriations bills and then uses these phantom savings to pay for unrelated discretionary spending.

This is one of the most commonly used budget gimmicks, known as Changes in Mandatory Programs (CHIMPS). In the 2018 omnibus, Congress rescinded over $3.5 billion from CHIP and used that money for other spending. In total, the omnibus had over $17 billion in phony CHIMPS savings that were used to evade the already inflated budget caps.

Ebola response funds are another example of money that should be rescinded. The $252 million that Trump is seeking to rescind was originally provided by Congress in 2014 under the emergency funding designation.

Over two years ago, the World Health Organization declared that the disease was no longer a world health emergency. While the number of cases has increased over the past few months, it is far from the levels of a few years ago and does not warrant emergency funding at this time.

In reality, the current rescissions package currently is the absolute smallest step that Congress could take toward fiscal sanity. Rescissions have never served as a meaningful method for reducing the federal deficit.

The president’s own Office of Management and Budget estimates that this package would achieve only $3 billion in real savings over the next 10 years. The Congressional Budget Office estimates that it would save even less, at under $1.3 billion.

While rescissions may not be the sole answer to fixing the nation’s fiscal problems, every journey starts with a small step. The president’s rescissions package represents an opportunity for Congress to show that in light of recent spending increases, it still cares, at least in some small amount, about cutting spending and enacting fiscal restraint.

Congress should stop wasting time and adopt the president’s package this week. It should then work with the administration to pass more meaningful rescissions packages that target the bloated 2018 omnibus spending bill.