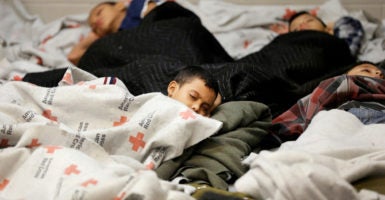 A California federal judge ruled in 2015 that hundreds of mothers and their children held for illegally crossing the border must be released immediately, finding their detention a serious violation of a long-standing court settlement and the conditions of their facilities grossly inadequate.

Judge Dolly M. Gee of the Federal District Court for the Central District of California rejected the Obama administration’s arguments for holding the families, saying they violated the long-standing 1997 class action suit known as the Flores settlement, which governs the treatment of unaccompanied minors apprehended at the border.

Gee slammed the Immigration and Customs Enforcement, the Obama administration, and other federal officials in the ruling for allowing children to be held in facilities that were of “widespread and deplorable conditions.”

In addition, Gee noted that federal officials had “failed to meet even [the] minimal standard” of “safe and sanitary” holding cells.

Gee ruled on a lawsuit filed earlier that year by Peter Schey and Carlos Holguin, lawyers at the Center for Human Rights and Constitutional Law in Los Angeles.

Schey, at the time of the ruling, felt it marked “the beginning of the end for the Obama administration’s immigrant family detention policy,” and that “a policy that just targets mothers with children is not rational and it’s inhumane.”

” […] there are adults who brought their children with them. Again, our message to this group is simple: we will send you back. We are building additional space to detain these groups and hold them until their expedited removal orders are effectuated. Last week we opened a detention facility in Artesia, New Mexico for this purpose, and we are building more detention space quickly,” Johnson said in an official statement before the Senate Committee on Appropriations in 2014.

While the wording of the original Flores agreement only mentioned unaccompanied minors, Gee’s ruling decided it covered all children in the custody of federal immigration officials, whether they are with their families or not.

Leon Fresco, then a deputy assistant attorney general at the Office of Immigration Litigation, warned Gee that if this ruling stood, it would encourage the Obama administration to separate children from their parents, reported the Los Angeles Times.

Gee referenced three specific facilities in her ruling—two in Texas and one in Pennsylvania. Specifically, she cited individuals who claimed the Customs and Border Protections facilities were extremely cold.

“Numerous declarants referred to CBP facilities as hieleras or ‘iceboxes’ and described being given coverings of aluminum foil that were inadequate to keep them warm,” the ruling stated.

The “deplorable” conditions also included the issue of overcrowding.

“Children and their mothers were held for one to three days in rooms with 100 or more unrelated adults and children, which forced children to sleep standing up or not at all,” Gee wrote.

This case, as well as the Flores settlement, are being brought to light as President Donald Trump faces backlash over his administration’s immigration detention and the zero-tolerance policy.

Trump signed an executive order to end the separation of immigrant families at the border on Wednesday.