The Riddle of the Father-Son Relationship 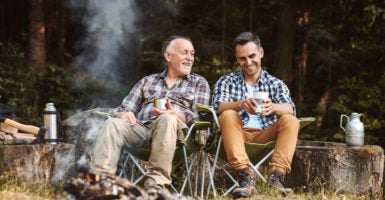 "The complicated nature of a man's relationship to his father has been the subject of literary and philosophical themes going back to antiquity," writes Armstrong Williams. (Photo: gpointstudio/Getty Images)

It has been many years since my own father passed, but I always celebrate Father’s Day in his honor.

My relationship with my dad was excellent. We enjoyed a very close bond as father and son. He taught me the virtues of discipline, hard work, manly strength, and keeping your word in all dealings professional and personal.

This Father’s Day though, I want to speak to the stories of other men, friends, and relatives whose relationships with their fathers were at times fraught with tension and conflict.

Celebrating Father’s Day can often be an emotionally complicated occasion for men. While the love we have for our mothers springs from the deep, primal physical connection we have from our time in her womb, our connection with our fathers can be more nebulous. We honor our fathers, and we respect them. But do we really, deeply love them?

The complicated nature of a man’s relationship to his father has been the subject of literary and philosophical themes going back to antiquity. One of the oldest stories is that of Oedipus, in which the son became the unwitting agent of his father’s demise.

As a young man, Oedipus went to visit the oracle at Delphi, hoping to gain insight and wisdom about his future. The message he received in return for his inquiry left him stunned and utterly horrified. The oracle told him that he would one day kill his father and marry his own mother.

In a tale that has come to exemplify the futility of fighting against one’s destiny, Oedipus sought to do everything in his power to avoid the oracle’s prophecy. One day, years later, he encountered an old man on the road to Thebes, got into a quarrel, and killed him in a fit of anger.

After arriving at Thebes, he was told that the king had been killed and that the Sphinx was holding the entire city ransom. The Sphinx demanded that the citizens solve a complex riddle in return for their freedom. Oedipus, who by that time had become a man of prodigious intellect, easily solved the riddle. The grateful citizens of Thebes granted him dominion over the city and betrothed him to the king’s widow.

As fate would have it, Oedipus learned that the people who raised him were not his biological parents after all. He was in fact the King’s son, and the man he had killed on the road was his own father. He thus fulfilled the oracle’s prophecy, although in a way he could never have foreseen.

Chastising himself for his lack of insight, he took two pins from the dress of his mother (now wife) and struck his eyes out, becoming blind.

The tragedy of Oedipus is so powerful because it underscores the role of the son in ultimately continuing the legacy of his father. From our fathers we learn mastery over the world; we learn wisdom and intellect; we receive from him masculine traits of setting goals, overcoming obstacles, and conquering the world. We inherit these traits so that the legacy of our fathers can survive even after he has passed away.

While he is alive, our father will always be the ruler of his kingdom—whether that is his family household, his business empire, or even a political dynasty. A man does not willingly cede any of his dominion to other men.

Countless wars of conquest and intrigue have waged over the centuries by kings challenged by other strong men. In antiquity, a prince could never become king until his father died. The prince was in effect counting on his father’s death to reach the pinnacle of his own growth and maturation.

The difficulty our fathers face in raising us to adulthood is that of creating sons strong enough to protect, grow, and defend the kingdom without challengers to his absolute authority.

As men, we often move away from our homes and seek our fortunes in places far away. We inevitably encounter challenges and defeats along our paths, and have to rely upon our father’s strength and wisdom to overcome them. In the process, we become stronger, more formidable, and more prodigious. We also become potential challengers to our father and sometimes find ourselves banished from the kingdom.

This Father’s Day, we can honor our fathers by becoming the best men we can be. Our fathers are in fact counting upon us to build upon and protect the family legacy when they eventually die.

By becoming the best versions of ourselves and making the most of the opportunities with which we are blessed, we are honoring the wisdom and love passed on to us and preparing ourselves to become worthy guardians of the realm.