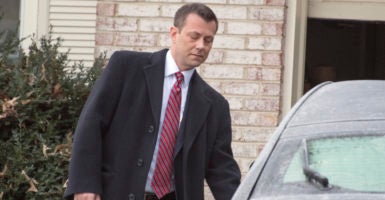 The Justice Department’s internal watchdog has found that FBI official Peter Strzok, a main player in the investigation of Hillary Clinton’s use of a private email server as secretary of state, texted about stopping Donald Trump from becoming president, Bloomberg News first reported.

Page, an FBI lawyer, had asked Strzok via text: “[Trump’s] not ever going to become president, right? Right?!”

Hours after Bloomberg published its story,  the full report was released around 2 p.m. Thursday on the website of the Justice Department’s Office of the Inspector General:

New: DOJ OIG releases A Review of Various Actions by the Federal Bureau of Investigation and Department of Justice in Advance of the 2016 Election

Horowitz writes in the report, according to Bloomberg, that “we did not find documentary or testimonial evidence that improper considerations, including political bias, directly affected the specific investigative actions we reviewed.”

But, referring to Strzok and Page, the inspector general writes that “the conduct by these employees cast a cloud over the entire FBI investigation.”

The two FBI officials reportedly were having an extramarital affair at the time.

The inspector general’s report is critical of then-FBI Director James Comey, who Trump ousted in May 2017.

“While we did not find that these decisions were the result of political bias on Comey’s part, we nevertheless concluded that by departing so clearly and dramatically from FBI and department norms, the decisions negatively impacted the perception of the FBI and the department as fair administrators of justice,” Horowitz writes.

A day ahead of the expected release of the report, Attorney General Jeff Sessions said firings could result.

“If anyone else shows up in this report to have done something that requires termination, we will do so,” Sessions told The Hill news organization.

Clinton, while serving as President Barack Obama’s first secretary of state from 2009 through 2012, did official business through email using a private server.

Comey announced in July 2016 that the FBI found that Clinton sent and received classified information on the personal email account, rather than using a secure government account, but determined she didn’t do so intentionally. The FBI director apparently did not consult his boss, Attorney General Loretta Lynch, in saying the government would not prosecute Clinton.

The 2016 Democratic presidential nominee has blamed the FBI investigation and Comey for her election loss to Trump.

Horowitz announced he would look into the FBI’s handling of the Clinton email probe in January 2017.