What China’s Moon Mission Means for the United States 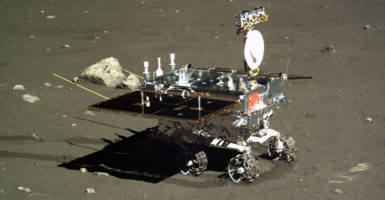 China is preparing to launch a satellite and rover to the far side of the moon. Pictured above is China's first lunar rover, sent as part of the 2013 Chang’e-3 mission. (Photo: xinhua Xinhua News Agency/Newscom)

Instead, it’s on its way to L-2, one of the five Lagrange points, where the Earth’s and the sun’s gravitational pulls cancel each other out.

China is deploying this satellite to support its lunar far-side mission, Chang’e-4.

China expects to launch Chang’e-4 in November or December. Chinese statements indicate that it will not only land on the far side of the moon, but also deploy a lunar rover, similar to the “Jade Rabbit” rover that was part of the 2013 Chang’e-3 mission.

This new mission will mark not only the first landing on the far side of the moon, but also an opportunity to take soil samples and test them, comparing them with samples retrieved from the side of the moon that faces the Earth.

Increasing innovation. China is demonstrating that it isn’t going to simply emulate other nations’ space efforts, but will increasingly chart its own course.

Neither the U.S. nor the Soviet Union/Russia has ever landed spacecraft on the far side of the moon. Similarly, no other nation has deployed a communications (or other application) satellite to any of the Lagrange points.

Sustained effort. The Chinese lunar-exploration program is not advancing at a breakneck pace; neither is its manned program, which is averaging about one mission every two years.

But with each mission, Beijing is demonstrating that a sustained effort, with stable funding, leads to increasing capability, including the forging of new paths.

Beijing is effectively indicating that it intends to access this additional volume of space, exploiting it for a variety of purposes. For those concerned with space situational awareness, the Chinese move will greatly complicate the ability to track all the various satellites and objects in orbit.

China has explicitly linked its space program to the array of investments spanning Central Asia and the Indian Ocean known as the “Belt and Road Initiative” (formerly the “One Belt, One Road” initiative).

In doing so, Beijing is making it clear that it intends to increasingly compete with the United States for pre-eminence in space, both strategically and commercially.

For the United States, which is seeking to reinvigorate its own space program, the challenge to American leadership in the realm of space science and commerce is increasingly clear.

How will Washington respond?