Report: 93% of Immigrants in Justice Department Custody Are Here Illegally 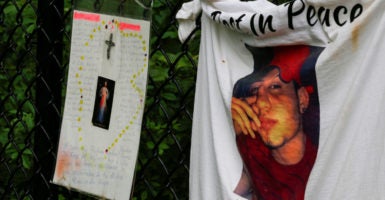 As with more than 1 in 5 of his fellow federal inmates, Rodriguez’s first offense was coming to the United States illegally.

The report is compiled in compliance with an executive order from President Donald Trump shortly after he took office in January 2017.

The report said that of the 183,058 inmates in the custody of the Justice Department’s Bureau of Prisons, 38,132—or 21 percent—were “known or suspected aliens.”

Of that 38,132, the report said, 55 percent were illegal immigrants subject to a final order of removal, and almost one-third remain under Immigration and Customs Enforcement investigation.

The U.S. Marshals Service detained 19,688 identified as “confirmed aliens under ICE investigation,” 70 percent of whom were subject to a final order of removal.

“Every crime committed by an illegal alien is, by definition, a crime that should have been prevented,” Attorney General Jeff Sessions said in a statement.

“It is outrageous that tens of thousands of Americans are dying every year because of the drugs and violence brought over our borders illegally, and that taxpayers have been forced, year after year, to pay millions of dollars to incarcerate tens of thousands of illegal aliens,” Sessions said.

“Bad actors know well our legal loopholes, which act as a magnet for illegal immigration,” Nielsen said in a written statement. “As DHS continues to carry out President Trump’s immigration priorities to keep America safe, Congress must urgently act to close dangerous loopholes that attract criminal aliens and also inhibit our ability to remove them.”

The report comes as the Trump administration is contending with a surge in unaccompanied minors at the border, and as Republican leaders in the House are fending off a discharge petition to force votes on immigration reform measures, including one that would  turn the Deferred Action for Childhood Arrivals program into law.

DACA was an executive action by President Barack Obama in 2012 to shield from deportation some illegal immigrants brought to the United States by their parents as children. Nearly 700,000 availed themselves of the initiative.