Health Insurers in Maryland Ask Rate Increases Up to 91% 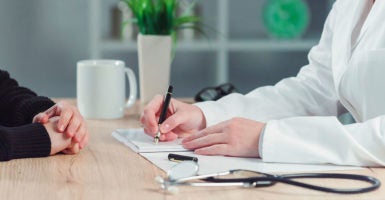 Insurers in Maryland’s Obamacare market are requesting an average rate increase of 30 percent in insurance premiums, with some asking for premium hikes as high as 91 percent.

Some Democrat leaders have been quick to blame the proposed premium hikes in Maryland, as well as those in Virginia, on the Trump administration’s health care policies.

“Republicans know they own the skyrocketing health care costs, but instead of working in a bipartisan fashion to lower the costs, they actively undermined our health care system and made the problem worse,” Senate Minority Leader Chuck Schumer, D-N.Y., said.

But one health policy expert says the recent requests for higher insurance premiums are the latest of many spurred by Congress’ passage of Obamacare, formally known as the Affordable Care Act, in 2010.

Edmund Haislmaier, a senior research fellow for The Heritage Foundation’s Center for Health Policy Studies, said the requested rate increases are part of a continuing trend that resulted from Obamacare’s requirements, not policy changes under the Trump administration.

Haislmaier said only 5 percent of the total requested premium increases was due to the tax reform bill, which repealed the Obamacare individual mandate, pointing to a Maryland Insurance Administration report.

“The market is such that by and large, the healthy people have already left,” Haislmaier said.

With fewer healthy people buying health insurance, he said, insurance rates have to go up to make up the difference for those who need constant coverage.