Right Side of History: Voter Fraud and Attempts to Steal Elections as Old as the Republic 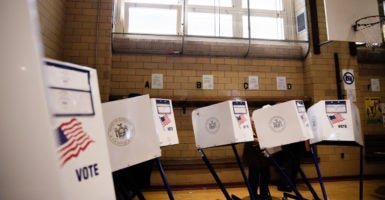 On this week’s episode, hosts Jarrett Stepman, a contributor to The Daily Signal, and Fred Lucas, The Daily Signal’s White House correspondent, discuss the history of voter fraud in the United States.

Among the most talked about controversies is the 1960 presidential race, where demonstrable chicanery occurred in Illinois and Texas. Questions also surrounded the controversial election of 1876 and the Hayes-Tilden dispute. However, in most cases, it’s not presidential races where voter fraud has its biggest impact.

More recently, numerous cases of noncitizens registered to vote were discovered in several states. There have been more than 1,100 proven cases of voter fraud, according to The Heritage Foundation’s voter fraud database.

J. Christian Adams, president of the Public Interest Legal Foundation, and Jason Snead, a legal policy analyst with The Heritage Foundation, join us to talk about the problem plaguing democracy.