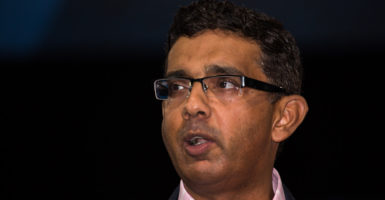 A day after meeting with a reality-TV celebrity on criminal justice reform, President Donald Trump issued a pardon to a celebrity and is considering clemency for two other public figures.

Will be giving a Full Pardon to Dinesh D’Souza today. He was treated very unfairly by our government!

On Wednesday, Trump met at the White House with Kim Kardashian, best-known for the reality-TV show “Keeping Up With the Kardashians,” who was promoting prison reform. She also discussed the case of Alice Marie Johnson, 63, who is serving a life sentence without the possibility of parole for drug offenses.

A pardon wipes the the entire conviction away, while a commutation shortens a sentence.

Mentioning the possibility of commuting the sentence of Blagojevich gave a bipartisan coloration to Trump’s high-profile pardon of D’Souza.

The president noted that Stewart isn’t a political supporter now. In 2004, James Comey, then a federal prosecutor, who Trump fired as FBI director last year, oversaw the case against Stewart, who was convicted for obstructing justice and lying to the government as part of an insider-trading case.

“I think to a certain extent Martha Stewart was harshly and unfairly treated, and she used to be my biggest fan in the world … before I became a politician,” Trump said. “But that’s OK. I don’t view it that way.”

D’Souza and Stewart have both served their sentences.

However, Blagojevich is still serving a 14-year prison sentence, and is set for release in 2024. He was convicted in 2011, after his impeachment and removal from office in 2009, on charges related to conspiring to sell an appointment to the U.S. Senate seat vacated by Barack Obama after the 2008 presidential election.

“Rod Blagojevich, 18 years in jail for being stupid and saying things that every other politician—you know, that many other politicians—say,” Trump said, overstating the length of the sentence while calling it unjust.

The former Illinois governor said in a recorded phone conversation that the Senate seat was valuable and that he couldn’t just give it away.

“I don’t know him other than that he was on ‘The Apprentice’ for a short period of time,” Trump said, referring to the reality-TV show he hosted for 14 seasons on NBC.

The Wall Street Journal published a May 28 op-ed essay by Blagojevich with the headline, “I’m in Prison for Practicing Politics.” The subheadline read: “Under the legal arguments the prosecutors used to convict me, all fundraising can be viewed as bribery.”

The Blagojevich opinion piece went on to argue:

The rule of law is under assault in America. It is being perverted and abused by the people sworn to enforce and uphold it.

Some in the Justice Department and Federal Bureau of Investigation are abusing their power to criminalize the routine practices of politics and government.

I learned the hard way what happens when an investigation comes up empty after the government has invested time, resources, and manpower.

When they can’t prove a crime, they create one.

The op-ed was not very persuasive, said John Malcolm, head of the Institute for Constitutional Government at The Heritage Foundation.

“While the president has virtually unfettered discretion when it comes to exercising the pardon power, it is generally meant to be used to correct a manifest injustice,” Malcolm told The Daily Signal. “Although I will be interested to hear what the president has to say and will keep an open mind, I am not aware of any manifest injustice that occurred in the cases involving Dinesh D’Souza, Martha Stewart, or Rod Blagojevich.”

As a good example, Malcolm cited Trump’s posthumous pardon on May 24 of the first black heavyweight boxing champion, Jack Johnson, whose 1913 conviction was racially motivated.

After Trump’s comments, a White House spokesman told reporters that the president said the pardon of Johnson has been the most important to him of those he has issued to date.

Mr. D’Souza was, in the president’s opinion, a victim of selective prosecution for violations of campaign-finance laws.

In light of these facts, the president has determined that Mr. D’Souza is fully worthy of this pardon.

D’Souza pleaded guilty in 2014 to violating campaign-contribution limits by using a straw donor to give $20,000 to Wendy Long’s unsuccessful 2012 Senate campaign. He was sentenced to five years of probation and eight months in a halfway house, and paid a $30,000 fine.