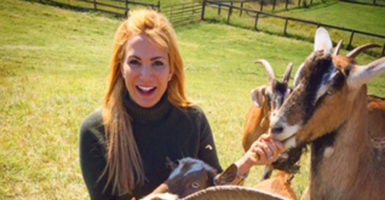 “This case should send a message to the unethical, corrupt radical environmentalists ... that America is not going to tolerate their land-grabbing abuse,” says Martha Boneta, pictured here at her Liberty Farm in Fauquier County, Virginia. (Photo courtesy Martha Boneta)

A husband-and-wife real estate team accused of teaming up with environmental activists and government officials to interfere with a Virginia farmer’s business have reached a legal settlement with the farmer, according to court records.

Martha Boneta, who owns and operates the 64-acre Liberty Farm at the foot of the Blue Ridge Mountains in Paris, Virginia, sought damages from the real estate agents, her neighbors, in a lawsuit filed in Fauquier County Circuit Court.

Under the terms of the legal agreement, Boneta is not permitted to disclose the amount of money attached to the settlement. She sued the neighbors, Phillip and Patricia Thomas, for $2 million, court papers show.

Phillip Thomas owns Thomas & Talbot Real Estate, based in Middleburg, Virginia, and used to own Boneta’s Liberty Farm. His wife, Patricia, also is a lawyer admitted to the bar in Virginia. Their farm, Liberty Hall, is across the road from Liberty Farm.

The Thomases are members of Piedmont Environmental Council, a nonprofit land trust headquartered in Warrenton, Virginia, that also was named in Boneta’s litigation. Their real estate company’s website identifies at least four other Thomas & Talbot agents associated with the land trust.

Phillip Thomas did not reply to a request for comment.

Boneta, who spoke with The Daily Signal before the settlement was reached, had sued the Thomases for what she described as “malicious interference with her business” and “harassment.”

The lawsuit accused Piedmont Environmental Council of violating the terms of a conservation easement on Liberty Farm. Phillip and Patricia Thomas had entered into a joint agreement with the land trust related to the litigation.

The idea behind conservation easements is for property owners to receive tax breaks in exchange for agreeing to restrict future development on a portion of their land.

As co-holders, Boneta’s easement lists the environmental council and the Virginia Outdoors Foundation, which the state General Assembly chartered in 1966 to monitor easements and promote land conservation.

In her litigation, Boneta claimed the environmental council overstepped its authority under state law in monitoring and inspecting her property. She also said she never received tax breaks through the easement.

Boneta’s case against the environmental council, dismissed in January 2017 by the county’s circuit court, could still be heard on appeal before the Virginia Supreme Court.

In response to an inquiry from The Daily Signal, Diana Norris, the in-house attorney for Piedmont Environmental Council, said in an email that the land trust will continue to fight Boneta’s accusations.

“PEC will continue to vigorously defend itself from the false allegations,” Norris said.

Boneta told The Daily Signal that her lawyers “made a technical error” in the appeal to the state Supreme Court and she is “weighing her options,” which include an appeal based on the merits.

Boneta filed a separate but related suit against the Piedmont Environmental Council, arguing that the group knowingly and falsely said while selling the property to her that Confederate Gen. Thomas “Stonewall” Jackson once camped on land that is now part of  Liberty Farm. That litigation remains active at the circuit court.

Phillip Thomas, a fifth-generation landowner, previously owned Liberty Farm, which is across the street from his 20-acre farm called Liberty Hall.

Boneta purchased Liberty Farm, also known as Paris Farm, from the environmental council for $425,000 in June 2006. The conservation easement was put in place simultaneously.

Bonner Cohen, a senior fellow with the National Center for Public Policy Research, said he views the settlement as a major turning point in the long, protracted legal battle.

For all the venality that has come to light, the whole exercise appears to have served the simple purpose of driving her off her land. By standing up to her well-heeled tormentors, she has shown how David can bring down Goliath. The lesson for farmers and other landowners is clear: Steer clear of conservation easements, because once you start surrendering your property rights, you are entrusting your future to people who don’t necessarily have your best interest at heart.

Boneta told The Daily Signal that her settlement with the Thomases could have reverberations across state lines.

“The lesson here is that you will pay a steep price for colluding with special interests to violate the property rights of average Americans,” Boneta said in a phone interview. “I want every American to never give up and to fight back against this type of abuse, no matter how long it takes. Stand your ground and justice will be served. We need land trust reform that will stop the corruption that is destroying property rights and hurting farmers.”

The Daily Signal previously obtained copies of letters Phillip and Patricia Thomas sent to public officials asking them to take punitive action against the farmer. Patricia Thomas used her law firm’s letterhead on some of the correspondence.

For example, on April 16, 2003, Phillip Thomas wrote Russell Rabb III, an assistant commonwealth attorney, thanking him for a meeting regarding “Boneta issues.” Nine days later, Rabb wrote back, saying, “There is not sufficient evidence to proceed forward with a criminal prosecution against Boneta.”

Since I haven’t heard from you, now you’re hearing from me again, reference the woman Martha Malawar [Boneta], Fauquier County, Gap Run Road, near Paris, who in my opinion, got a hell of a lot of money out of your bank using the property as collateral.

The Thomases later attempted to buy the mortgage on Liberty Farm, asking in a Feb. 2, 2009, letter: “Would Sonabank [parent of Southern Trust Mortgage] be interested to sell its note?”

“This case should send a message to the unethical, corrupt radical environmentalists out there as a warning that America is not going to tolerate their land-grabbing abuse,” Boneta said. “Farmers will fight back and justice will be served.”

Peter Schwartz, a former member of the Fauquier County Board of Supervisors, figures prominently in government correspondence with the Thomases. In 2012, Schwartz—a lawyer and real estate developer who also is a former board member of the Piedmont Environmental Council—publicly disclosed that Boneta was the subject of an IRS audit before the audit had been served.

The Virginia Outdoors Foundation floated a proposal in November 2014 under which it would assume full control of the easement. The foundation later uncovered what it called “a number of serious flaws” that require a “corrective amendment” to the easement, which complicated this effort.

The legality of the easement remains a point of contention. The foundation did not reply to The Daily Signal’s request for comment by publication time.

In the past few years, Boneta played a critical role in securing passage of two property rights bills in the Virginia General Assembly that bear her name. Both bills are now law.

One bill amended the state’s Right to Farm Act to prohibit zoning laws from intruding upon the ability of farmers to conduct commercial activities.

The other one, known as the Conservation Transparency Act, gave landowners the ability to call on the Virginia Land Conservation Foundation to resolve disputes with land trusts related to the terms of a conservation easement. The foundation, a state agency, is charged with awarding grants to cover the costs of easement purchases.