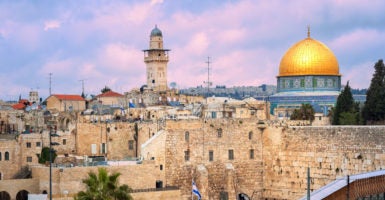 Multiple nations in the Middle East not only refuse to recognize Jerusalem as Israel's capital, but refuse to accept Israel's right to exist. (Photo: Xantana/Getty Images)

In 1841, Orson Hyde, an early Latter-day Saint and distant family relative of my wife, visited the Holy Land. He said a prayer on the Mount of Olives, preparing that land for the return of the historic inhabitants of Jerusalem, the Jewish people.

More than 175 years later, as I witnessed the official opening of the U.S. Embassy in Jerusalem on May 14, I thought of Hyde’s pilgrimage and all that it meant for him, his faith, and our country.

Hyde’s prayer of dedication was part of an ongoing journey for the Jewish people and, indeed, the world. Over time, the Jewish people managed to establish a Jewish homeland in a land where their ancestors once lived. On May 14, we celebrated another milestone along that journey.

That was a monumental day for U.S.-Israel relations. Anytime two allies can speak honestly with each other, both are better for it. And for the first time in many years, the United States formally acknowledged the reality that Jerusalem is the capital of Israel.

In so doing, the United States courageously led the way for some of our allies to do the same.

For decades, while the world recognized a Jewish state, it did not recognize the Jewish capital. While Israelis recognized Jerusalem as their seat of government, the world refused to do so.

It would be as if we as Utahans recognized Salt Lake City as our capital, but outside states and our national government disregarded our decision and obstinately continued claiming Fillmore was our capital.

Congress first made a step to rectify this problem when it passed a law recognizing Jerusalem as the rightful capital of Israel in 1995. Unfortunately, every president since then has failed to execute that statute, leaving the U.S. Embassy in Tel Aviv.

President Donald Trump, however, followed through on his campaign promise to move the U.S. Embassy to Jerusalem, and I applaud him for doing so.

Despite harrumphing resolutions of condemnation and disapproval by such bodies as the United Nations and protests by the European Union, the United States has remained firm in our commitment to Israel and to commonsense foreign policy that puts embassies in national capitals.

This move establishes firmly and unequivocally our support for Israel. Peace in the Middle East will not be possible until all parties involved acknowledge Israel’s right to exist as a separate, independent state.

With the location of our embassy no longer a lingering question, we now hope to engage in broader dialogue for the future of peace and stability for Israel and the region.

Both before and after the ceremony, I received countless expressions of gratitude from Israelis thanking us for acknowledging the true capital of their country. This was a deeply meaningful act for the Israeli people, as well as for those of us who recognize Jerusalem’s undeniable influence throughout time as the center of history and hope for Jews, Christians, and Muslims.