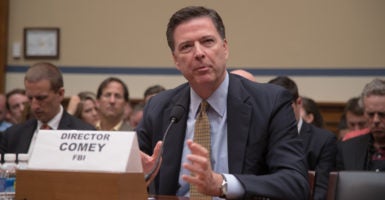 James Comey, then FBI director, testifies July 7, 2016, before the House Oversight and Government Reform Committee, days after he concluded Hillary Clinton should not be prosecuted for using a private email server as secretary of state. (Photo by Jeff Malet Photography /Newscom)

At least 19 House Republicans are sponsoring a resolution calling for a special counsel to investigate the conduct of the Justice Department and FBI during the 2016 election campaign.

For a year now, special counsel Robert Mueller and his team have investigated Russia’s meddling in the presidential election and possible collusion with the Trump campaign.

The resolution calls for a second special counsel to look at how the Justice Department handled the probe of Hillary Clinton’s use of a private email server as secretary of state, how the Russia investigation regarding President Donald Trump began, and potential abuse of the Federal Intelligence Surveillance Act.

The 12-page measure, if approved, would be a “sense of Congress” resolution and would not bind the Justice Department.

“In just the past few days, we learned that the DOJ, FBI, or both appear to have planted at least one person into Donald Trump’s presidential campaign to infiltrate and surveil the campaign,” Rep. Lee Zeldin, R-N.Y., said Tuesday at a Capitol Hill press conference. “This action alone reminds us of just how necessary this resolution is, as well as the appointment of a second special counsel.”

The Justice Department’s Office of Inspector General has completed a draft report on the FBI’s Clinton investigation and just announced it will do a separate review of the FBI’s apparent spying on the Trump campaign. But an inspector general does not have authority to subpoena and bring charges, as a special prosecutor would.

Here are five unanswered questions about the actions of the Justice Department and FBI during the 2016 presidential campaign.

1. Was ‘Informant’ a Spy in Trump Campaign?

Numerous media organizations reported in recent days that Stefan Halper, a professor at Cambridge University who served in three Republican administrations and has ties to the CIA and British intelligence, was a government informant who gathered information on the Trump campaign in 2016.

The White House backed the Justice Department’s decision to have the inspector general look into apparent spying on the Trump campaign, while also allowing White House chief of staff John Kelly to review classified information the department has resisted providing to Congress regarding the informant.

The FBI obtained phone records and other documents using national security letters—a secret type of subpoena—officials said. And at least one government informant met several times with [Carter] Page and [George] Papadopoulos, current and former officials said. That has become a politically contentious point, with Mr. Trump’s allies questioning whether the FBI was spying on the Trump campaign or trying to entrap campaign officials.

“If the FBI was running a confidential informant or a recruited asset against a presidential candidate, that would mark a significant departure from what is proper with regard to political targeting and the use of law enforcement,” Chris Farrell, a former Army counterintelligence officer who now directs investigations and research for Judicial Watch, told The Daily Signal.

After Trump and Republicans in Congress raised questions abouts its reporting, the Times published a follow-up story that seemed to parse the terms “informant” and “spy.”

A Times story over the weekend was headlined “FBI Used Informant to Investigate Russia Ties to Campaign, Not to Spy, as Trump Claims.” The story asserted: “No evidence has emerged that the informant acted improperly … or that agents veered from the FBI’s investigative guidelines.”

Nevertheless, such a move would be highly unusual during a presidential campaign, said Hans von Spakovsky, a senior legal fellow at The Heritage Foundation and a former Justice Department lawyer.

“Whether it’s a spy, informant, or an undercover agent, it is unprecedented for federal law enforcement to spy undercover against a political campaign,” von Spakovsky said.

The Times’ weekend story described an encounter in summer 2016:

Over drinks and dinner one evening at a high-end London hotel, the FBI informant raised the subject of the hacked Democratic National Committee emails that had spilled into public view earlier that summer, according to a person familiar with the conversation. The source noted how helpful they had been to the Trump campaign, and asked Mr. Papadopoulos whether he knew anything about Russian attempts to influence the 2016 presidential election.

Mr. Papadopoulos replied that he had no insight into the Russian campaign—despite being told months earlier that the Russians had dirt on Mrs. Clinton in the form of thousands of her emails. His response clearly annoyed the informant, who tried to press Mr. Papadopoulos about what he might know about the Russian effort, according to the person.

Attorney General Jeff Sessions informed Congress in March that he had opted against naming a second special counsel, but instead appointed U.S. Attorney John Huber of Utah to work with the Justice Department’s inspector general.

“The only thing that we have from Mr. Huber so far is an accumulation of frequent flyer miles,” Rep. Mark Meadows, R-N.C., a sponsor of the resolution, said during the Capitol Hill press conference Tuesday.

“There has been no report, no investigation to speak of,” Meadows, chairman of the House Freedom Caucus, said. “I can tell you it is deeply troubling when we are talking about transparency that we are not getting transparency from the FBI and the Department of Justice.”

The Justice Department has asked its Office of Inspector General to expand the current probe of officials’ use of the Foreign Intelligence Surveillance Act, or FISA, to include possible impropriety or political motivation with regard to spying.

This development occurred after Trump used Twitter to call for a probe.

I hereby demand, and will do so officially tomorrow, that the Department of Justice look into whether or not the FBI/DOJ infiltrated or surveilled the Trump Campaign for Political Purposes – and if any such demands or requests were made by people within the Obama Administration!

“With the revelations that our campaign may have been the subject of surveillance by the FBI, the president I think is grateful that the Department of Justice is going to have the inspector general look into it and determine and ensure that there was no surveillance done for political purposes against our campaign,” Pence said.

Trump drew former President Barack Obama into the controversy with a Monday tweet.

The Wall Street Journal asks, “WHERE IN THE WORLD WAS BARACK OBAMA?” A very good question!

Trump was referring to the headline on a May 18 column by James Freeman, an assistant editor at The Wall Street Journal.

Freeman’s column asked: “And what does the man who was serving at the time as the FBI’s ultimate boss have to say about all this? Perhaps it’s a good moment to get the whole story from our 44th president.”

If Obama was not informed about the matter, he perhaps should have been, von Spakovsky told The Daily Signal.

“Given the danger posed when law enforcement is capable of being used for political purposes, I don’t believe federal law enforcement should initiate such a project without getting the approval of the president of the United States,” von Spakovsky said.

4. Was the FBI Honest on the Steele Dossier?

The Hillary Clinton campaign and the Democratic National Committee funded the dossier as opposition research and the FBI used it as a basis for obtaining a FISA warrant to surveil Page, the Trump campaign aide.

The House resolution faults the FBI for “failing to disclose” to the FISA court that the dossier was a political opposition research. The resolution quotes former FBI Director James Comey as calling the information in the dossier “salacious” and “unverified.”

Rep. Jim Jordan, R-Ohio, noted how many FBI and Justice Department officials have been fired, reassigned, or demoted over the past year.

“When they ran that investigation, what did they do?” the Ohio Republican asked. “They took this dossier, dressed it all up, made it look like it was legitimate intelligence, took it to a secret court to get a secret warrant to spy on a fellow American citizen. When they went to the court, they didn’t tell them who paid for the document.”

The House Republican resolution asks for the new special counsel to probe several aspects of how the FBI investigated the Clinton email scandal.

Officials whose actions were scrutinized were allowed to review the draft report’s findings and respond, AP reported.

FBI officials knew in September 2016 that Clinton emails were stored on the laptop of disgraced former Rep. Anthony Weiner, D-N.Y., but waited until days before the Nov. 8 election to obtain a search warrant.

The inspector general’s report was expected to criticize Comey, the FBI director during the Clinton email probe and early stages of the Trump-Russia probe. The president fired Comey in May 2017.

Comey writes in his book, “A Higher Loyalty,” that he learned in early October that Weiner’s laptop could be connected to the Clinton email investigation. He said it wasn’t until Oct. 27 that FBI officials asked his permission to seek a warrant.

The House resolution refers to a Senate Judiciary Committee finding that reads: “Comey was prepared to exonerate Hillary Clinton as early as April or May of 2016 when he began to draft a statement announcing the end of the investigation, before up to 17 key witnesses, including former Secretary Clinton and several of her closest aides, were interviewed.”

Comey told the House Judiciary Committee in September 2016 that he made the decision not to recommend criminal charges after the FBI interviewed Clinton on July 2.

The inspector general’s report also is expected to criticize a series of electronic text messages between FBI agents Peter Strzok and Lisa Page that disparaged Trump during the campaign, AP reported. Strzok, a lead agent in the Clinton probe, reportedly was having an affair with Page at the time.