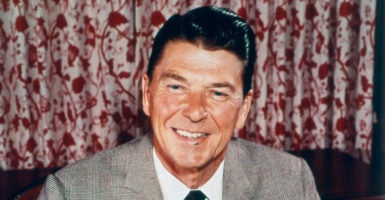 President Ronald Reagan led America out of a psychological depression caused by the Vietnam War, the Watergate scandal, and the Jimmy Carter presidency. (Photo: akg-images/Newscom)

Have you noticed? Liberals are counseling conservatives to be “realistic” and no longer look to Ronald Reagan for answers to the problems of 2018 and beyond.

After all, they say, he was elected president nearly four decades ago, when the Cold War was still being waged and stagflation was strangling the economy.

Reagan ideas like supply side economics and maintaining a defense establishment second to none, they say, are no longer relevant in a global economy and in the absence of an aggressive adversary like the Soviet Union.

Well, extreme caution should be exercised when a long-time adversary offers you advice. To paraphrase an old maxim—beware of liberals bearing gifts.

Still, when even friends suggest the same thing, a prudent man will ask himself whether the suggestion has any merit. Yes, Reagan was a great president, one of the two great presidents of the 20th century, but this is the 21st century. Unquestionably, the world has changed—it is no longer bipolar, politically or economically.

However, before consigning our 40th president to the history books, we would do well to examine a few of his accomplishments, determine what ideas guided them, and ask whether those ideas are still relevant.

First, through his personal charisma and his belief in the exceptionalism of America, Reagan restored Americans’ confidence in themselves and their future. As the social philosopher Michael Novak put it, “He awakened the better angels of our nature.”

Reagan led America out of a great psychological depression caused by the Vietnam War, the Watergate scandal, and the misery index of the Jimmy Carter presidency.

Second, Reagan applied the principle of limited government to the economy, cutting taxes and initiating other supply side measures such as deregulation and reduced federal spending, which produced an unprecedented period of economic prosperity lasting well into the 1990s.

He insisted that if you reduced tax rates and allowed people to spend or save more of what they earned, “they’ll be more industrious, they’ll have more incentive to work hard, and money they earn will add fuel to the great economic machine that energizes our national progress.”

As a result, during the 1980s, economic growth averaged 4.6 percent annually, the gross national product doubled, and 17 million new jobs were created.

Third, Reagan ended the 40-year Cold War by winning it. He did it through a policy of “peace through strength,” a concept first articulated by President Dwight D. Eisenhower.

This Reagan Doctrine was a prudent foreign policy that included a strong national defense, U.S. support of pro-freedom forces in Afghanistan and Nicaragua, a firm commitment to the Strategic Defense Initiative—which the Soviets could not match—aid to Poland’s Solidarity movement and similar anti-communist groups behind the Iron Curtain, and a sustained diplomatic offensive led by Reagan, who famously predicted in 1982 that Marxism-Leninism was headed for the ash heap of history.

Before the decade was out, Soviet communism in Eastern and Central Europe had collapsed and two years later, the Soviet Union—the “evil empire”—dissolved.

To summarize these accomplishments and the ideas upon which they were based: (1) Reagan restored public confidence in American ideals and institutions through his optimism and can-do spirit; (2) he ignited a historic period of economic growth through commonsense economics—tax cuts, deregulation, reduced government spending, and low inflation; and (3) he ended America’s longest war by winning it through a prudent foreign policy based on America’s founding principles and backed by our capabilities.

Do the ideas of patriotism and American exceptionalism, commonsense economics, and peace through strength still make sense? Of course they do.

Are Reagan and his presidency still relevant? Of course they are.

Should we apply his principles to help preserve a sound national defense and encourage a sound economy today? Absolutely.

Should we advise our liberal friends that the way back to the White House and a congressional majority for them is to forget about Franklin D. Roosevelt and his four-term presidency? Without a doubt. It’s imperative to be relevant, you know.