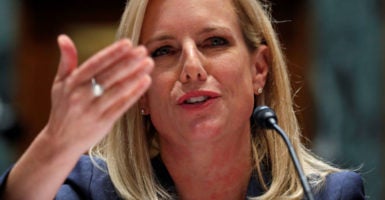 "It is our policy that anyone crossing the border illegally will be detained and referred for prosecution. We will no longer exempt classes or groups of individuals from prosecution," says Homeland Security Secretary Kirstjen Nielsen.(Photo: Kevin Lamarque/Reuters/Newscom)

Before what would become a heated exchange over her opposition to illegal immigration—because, you know, it’s the law—Nielsen in her opening statement explained what should be obvious to all:

If you try to enter the country without authorization, you have broken the law. …  It is our policy that anyone crossing the border illegally will be detained and referred for prosecution. We will no longer exempt classes or groups of individuals from prosecution. …

But our zero-tolerance policy and more funding for border security will only get us part way there. We need Congress to pass legislation to close legal loopholes that are being exploited to gain entry into our country.

Apprehensions without the ability to remove those who have no legal right to be here is not border security. The smugglers know these loopholes, and they are taking advantage of us every single day.

They know it is easier to get released into America if they claim asylum, if they are part of a family, or unaccompanied children. It should come as no surprise that we are seeing a spike in all of these categories. …

The gaming of the system is unacceptable. We need urgent action from Congress to close these dangerous legal loopholes making our country vulnerable. For border security to work, violation of the law must have consequences.

Immigration experts have long argued that although border security is important, it only as good as the enforcement that backs it up.

Nielsen clearly gets that and is pushing Congress to fix the loopholes in our legal immigration system.

These loopholes range from the unintended consequences of the well-meaning William Wilberforce Trafficking Victims Protection Reauthorization Act (which incentivizes the illegal immigration of unaccompanied children) to the abuse of America’s desire to help the persecuted through the asylum system.

Other policies, such as the Flores Settlement Agreement, which have been interpreted as providing special protections to families with children further contribute to the problem.

These loopholes make it difficult for immigration officials to removal illegal immigrants, who instead of quickly being returned to their home country are often released into the U.S. to await further immigration proceedings.

Together with limited resources, these loopholes exacerbate the “catch and release” problem. Catch and release is a problem because about 40 percent of those released fail to show up at their immigration court hearings.

As for those who do show up, the sheer number of cases and the need to provide special protections are overwhelming the immigration court system.

Congress should heed Nielsen’s advice and look to close these loopholes. Lawmakers should maintain protections for the vulnerable and persecuted, but should also prevent these protections from being exploited in the facilitation of illegal immigration.