How to Resolve Tangled Relationship Between Congress and Homeland Security 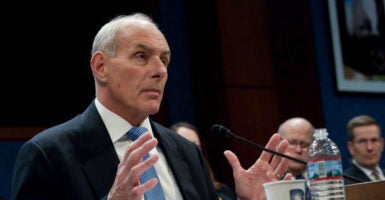 With homeland security being such a national priority, one would expect Congress and the Department of Homeland Security to have a well-organized relationship.

Unfortunately, that is not the case.

Why has Congress put off the task for so long? In large part because over the past 15 years, Homeland Security has reported to between 80 and 120 different committees and subcommittees in Congress.

This complicated oversight arrangement exists because the committees that originally had jurisdiction over the department’s component organizations refuse to give up their power.

Ultimately, this fractured reporting process complicates the reauthorization process. Why do eight committee chairs have to work together to authorize a single department?

In addition, Congress’ impracticable way of organizing its jurisdiction lends itself to producing an oversight process that is duplicative and contradictory.

For example, the homeland security committees could provide guidance to the Department of Homeland Security on how ports or border crossings should be improved. The agriculture, finance, judiciary, and other committees, however, could have completely different opinions, forcing Homeland Security to reconcile multiple views from Congress.

Not only does this harm Homeland Security operations, it lessens the impact of congressional oversight.

Further, because the department reports to around 100 committees and subcommittees, it spends countless work hours and millions of dollars testifying before Congress on its progress and status.

This repetitive and wasteful habit must be eliminated in order to allow the department to return to its primary mission of protecting the homeland.

In order to resolve the oversight conflict, the Department of Homeland Security’s reporting system must be streamlined.

The department should only report to six congressional committees: the House and Senate homeland security, intelligence, and appropriations committees. In doing so, Homeland Security would be following the model of the Department of Defense.

After all, it’s a bit ridiculous that Homeland Security, which has a budget one-tenth the size of the Department of Defense, currently reports to over three times as many committees.

The current Department of Homeland Security oversight structure that Congress has in place prioritizes politics over security. Countless bipartisan organizations and individuals have acknowledged that the prevailing system is outdated and only remains in existence to satisfy narrow parochial interests.

As such, it is pivotal that these power politics are put aside in order to protect the interests of the American people.

Streamlining congressional oversight would allow both Congress and the Department of Homeland Security to function more efficiently, and the U.S. homeland will be safer because of it.