Everyone Needs a Close Community, but Those Are Fewer and Fewer 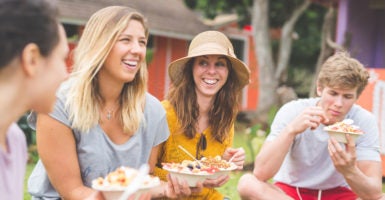 The Social Capital Project found stronger levels of social connection in the Midwest, West, and Northeast, and lower levels in the South, Southwest, and New York. (Photo: FatCamera/Getty Images)

According to the Department of Commerce, the United States economy grew 2.6 percent in the most recent economic quarter. This is strong economic growth.

And according to the Labor Department, the unemployment rate held steady at 4.1 percent in March for the sixth month in a row. Economists consider this number to be near full employment.

And yet we all also know that not everything is going in the right direction in our country. Today a lot of our communities are struggling with challenges like addiction, family breakdown, and isolation. The economic numbers that our government collects do not provide us with a full picture of American life.

Genuine human connections are the foundation of a happy life. They occur at home, but also in the community in churches, civic groups, neighborhood gatherings, and workplaces.

Social scientists refer to these connections as “social capital,” to illustrate that they are a resource every bit as precious as money. Indeed, more precious. Just as social capital is important for each of us as individuals, so too is it important in the life of a community.

So where is civil society flourishing, and where is it struggling?

This week the Social Capital Project released the Social Capital Index—the clearest picture ever taken of the health of American communities, state by state and county by county. You can read the full report here, but below are a few of its findings.

We’ll start with the bad news, which will not be news to many of you: Social capital is not distributed equally in our country, and lots of American communities are struggling with challenges like addiction, family breakdown, and isolation.

States in the South and Southwest have the lowest social capital scores, plus a few states in the North like New York.

In many areas in these states, the institutions and values that support healthy relationships have broken down. Churches and civic groups are not the support network and wellspring of meaning and moral education that they once were. This breakdown of community has left individuals to fend for themselves in increasing isolation.

But there are bright spots as well. States with high social capital tended to be rural states in the West, Midwest, and Northeast.

Our state, Utah, had the highest social capital score because of its stable families and commitment to helping the less fortunate. Utah ranked first out of the 50 states and Washington, D.C., for family unity, social support, and philanthropic health.

The Social Capital Index is not a competition so much as a tool. Now that we have an understanding of what social capital is and where it is concentrated, we are better prepared to address important policy questions about family breakdown, drugs, and crime.

As we look at Utah’s first-place finish in the index, we should think to ourselves, “What has Utah done right? And how can we use this knowledge to help our neighbors in need, both within Utah and across the country?”