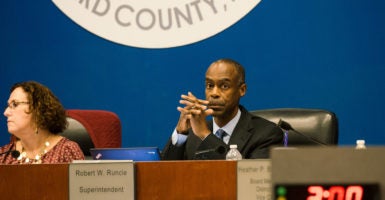 Broward County Public Schools Superintendent Robert Runcie has been criticized for his handling of school safety in the lead up to the Parkland shooting. (Photo: Emilee Mcgovern/ZUMA Press/Newscom)

The discipline policies that allowed the Marjory Stoneman Douglas High School shooter to fall through the cracks may be coming to your community.

In 2013, Broward County, Florida, adopted school discipline policies aimed at ending the “school-to-prison pipeline” as well as racial disparities in punishment. The Obama administration recommended these policies as official guidance to schools across the country.

The results in Broward County have been worrying, to say the least.

Since 2015, three Broward County students have “brought loaded firearms into schools and threatened to go on shooting sprees.” That’s just one of the many shocking findings uncovered by a recent report by RealClearInvestigations.

As planned, the new policies resulted in a drop in student suspensions—which some celebrated—but that drop came at the heavy price of an overall increase in campus “fighting, weapons use, bullying, and related suicides,” according to the report.

The dysfunction even spilled off campus into local communities, as crime rates shot up throughout Broward County. This, at a time when crime throughout the state decreased.

[M]urders, armed robberies, and other violent felonies committed by children outside of schools have hit record levels, and some see a connection with what’s happening on school grounds. Since the relaxing of discipline, Broward youths have not only brazenly punched out their teachers, but terrorized Broward neighborhoods with drive-by shootings, gang rapes, home invasions, and carjackings.

The report went on to provide some worrying numbers:

Juvenile arrests for murder and manslaughter increased 150 percent between 2013 and 2016. They increased by another 50 percent in 2017. … Last year, the number of Broward juveniles collared for armed robbery totaled 92, up 46 percent from 2013, department data show. Arrests for auto thefts jumped 170 percent between 2013 and 2017—from 105 to 284. Juveniles charged with kidnapping, moreover, surged 157 percent in 2016 and another 43 percent last year.

Not only has crime surged, but the very problems the new policies were supposed to address (like racial disparities in punishment) actually got worse. According to the report:

The PROMISE and Behavior Intervention Programs have not accomplished the core objectives they were created to achieve in 2013—closing the racial disparity in suspensions, expulsions, and arrests between black students and white students. That gap is now wider than ever, in spite of a “very aggressive” Broward system goal of decreasing the black arrest rate by 5 percent each year and 33 percent overall.

This RealClearInvestigations report is not the only evidence that Broward’s school discipline policies have failed. Another investigation by Broward County student journalist Kenneth Preston recently uncovered that the school district had failed to spend nearly all of the $100 million in federal money it was granted in 2014 to make school safety upgrades.

At a recent school board meeting, Broward County Superintendent Robert Runcie essentially called this report fake news for implying that Broward’s policies may have helped enable the school shooting.

“Connecting PROMISE to this horrific tragedy is truly unfortunate, I think it’s reprehensible, and we’re not going to dismantle a program in this district that is serving and helping kids appropriately because of news that is not fact-based,” Runcie said.

This blame-shifting aside, both the Preston and RealClearInvestigations reports speak for themselves. They bring to the table mounting evidence that Broward County’s PROMISE program is riddled with problems.

But perhaps more importantly, school districts across the country should consider their own levels of school discipline in light of the PROMISE program, which the Obama administration pushed nationwide.

School districts should heed the painful lessons from this program.