Renewed US Leadership Blocks Abortion Agenda at the UN 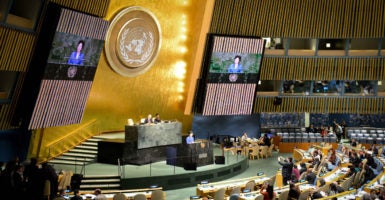 The U.N. Commission on Population and Development failed to pass an outcome document, thanks to U.S. and African opposition. (Photo: Niu Xiaolei Xinhua News Agency/Newscom)

For the third time in the past four years, the United Nations Commission on Population and Development has ended in failure—good news for defenders of national sovereignty in the face of hegemonic U.N. pressures.

Negotiations concluded last Friday without producing an outcome document, which is the whole purpose of the two-week process. The outcome document would set forth political recommendations for governments to follow with regard to population and development issues.

The lack of a document means the last two weeks were a massively expensive waste of time. This, compounded upon previous failures, could lead to a collapse of the entire process, which dates back to 1946.

Rejection of the document came from the United States and the 54 countries that make up Africa, who, despite constructive efforts to achieve consensus, were unable to accept the final document as a result of consistent disregard for their national positions. In a stunning show of unity, the U.S. and the African group joined forces to reject the outcome document.

The deal-breaker for Africa was the refusal of the European Union and other member states to include language on national sovereignty, sourced from foundational U.N. documents, which would have protected its right to set policy on certain controversial issues in accordance with its national law. Traditionally, the commission always includes this protective clause. Africa also highlighted the overabundance of abortion references in the proposed document as a reason for the rejection.

For the U.S., while sovereignty was also a major consideration, it was the flagrant promotion of abortion “rights” that formed the crux of its decision to reject the document.

The theme of this year’s commission was migration—undoubtedly, one of the most pressing issues of our time. The movement of peoples, and in particular the plight of suffering migrants, carries with it urgent implications and merited serious attention from the commission.

Africa took a strong stance in favor of expansive rights for migrants, while the U.S. favored a more measured approach in line with domestic law. It is striking to note that Africa still rejected the document, even having obtained the migration language that it wanted.

Developing countries have much to gain from the commission, as it is a crucial channel for development funding. These countries do not walk away without a document lightly, so this year’s rejection shows that Africa placed an ultimate priority on resisting the controversial agendas contained in the final document.

So why does this U.N. commission keep on failing?

For far too long, governments have allowed the U.N. to force upon them documents that violate their national laws and norms. Lacking the stamina to reject these documents, governments have tried to ward off unwanted U.N. pressure to force changes in their laws on sensitive social issues, relying on half-hearted “reservation statements” made at the end of negotiation processes to demonstrate continued resistance to U.N. tyranny.

These statements are quickly forgotten, lost in the labyrinth of the U.N.’s bureaucratic memory, leaving countries defenseless when U.N. agencies come knocking on their door demanding that they change their law on issues like abortion.

It is only by completely blocking these coercive documents that governments can fortify themselves against such pressures. Throwing out the document sends a clear signal that the fundamental working methods of the U.N. are in serious jeopardy.

In an ideal world, the U.N. would return to building authentic consensus, but that seems unlikely given the current climate in which all too often Western nations seek to impose their values on the developing world. But with each failure, the commission is forced to acknowledge that consistently ignoring the positions of member states and relentlessly pushing forward documents that violate sovereign prerogatives is bound to end in disaster.

Natalia Kanem, the executive director of the U.N. Population Fund, expressed her hope that next year, “understanding and appreciation would be renewed and re-energized in order to achieve consensus.” It’s a laudable sentiment, but the fact remains that her organization is fundamentally predicated on the ruthless promotion of “sexual and reproductive health rights” with total disregard for views held by other countries.

Diplomats who hold contrary positions live in constant fear of this agency. They are subject to persistent threats, including attempts to remove them from their jobs, and appeals to higher levels of government to put pressure on countries to change their positions on sensitive social issues.

It is thus highly unlikely that the U.N. Population Fund, with its history of coercion, will be able to dramatically overhaul its approach to achieve real consensus next year.

The growing trend of countries saying “No” to infringements on their sovereignty—even at the cost of millions in U.N. aid money—is in large part owing to renewed American leadership at the U.N.

For many years, Africa has shouldered the primary burden of resisting U.N. coercion. It has blocked documents alone, and taken the blame for being “unconstructive” in the face of aggressive coercion.

Now, dynamics are changing as a result of the United States’ willingness to take a stand. In the last 18 months, the U.S. has gone from being one of the most aggressive promoters of abortion on the global stage to one of the staunchest defenders of the unborn.

The U.N. Population Fund depends on outcome documents to legitimize its plan of action to impose abortion access on every country in the world. It stands to lose the most from this year’s result.

The U.N. will soon assess the usefulness of the commission, and more than likely, a majority of countries—primarily from the developing world—will move to shut it down or drastically reform it in light of its failures to achieve genuine consensus among nations.