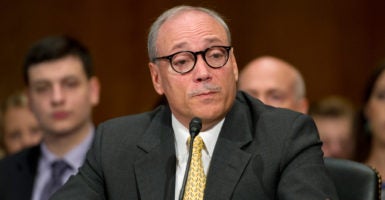 Patrick Pizzella testifies before the Senate Committee on Health, Education, Labor and Pensions on his nomination as deputy secretary of labor. (Photo: Ron Sachs/CNP/Newscom)

After months of lagging in confirming President Donald Trump’s nominees for top executive branch posts, the Republican-led Senate helped the president staff up with a former Reagan administration appointee at the Labor Department, a top deputy at the Environmental Protection Agency, and a new balance of power on the National Labor Relations Board.

The Senate votes on the three executive branch officials in the past week largely were along party lines.

However, the lawmakers also confirmed three new federal judges by comfortable margins, all under 50 and two of them women. The actions bring the number of Trump-nominated judges confirmed to 32 since the president took office.

The movement was sure to cheer Senate Majority Leader Mitch McConnell, R-Ky., who has expressed frustration with the slow pace of confirmations resulting from Democrats’ obstruction.

“The Senate’s work week will not end until all of these amply qualified nominees are confirmed,” McConnell said in a floor speech April 9.

The Senate voted 50-48 Thursday morning to confirm Patrick Pizzella, an official in the previous three Republican administrations, to be the No. 2 official at the Labor Department.

The Senate also voted 50-48 Wednesday to approve John F. Ring as a new member of the NLRB, meaning the labor board now has a 3-2 Republican majority. Its 2-2 tie, critics say, had produced rulings that continued Obama administration policies.

“We’d like to see them take on a lot more than six, but we’re certainly glad to see those six move forward,” @PressSec says.

On Thursday, the Senate confirmed Andrew Wheeler as deputy administrator of the Environmental Protection Agency by a slightly less partisan vote of 53-45.

>>> Related: Here Are 6 of the 146 Key Trump Nominees Stalled in the Senate

Republicans hold 51 of the 100 seats in the Senate, while Democrats hold 47. Two independent senators caucus and vote with the Democrats.

The president’s nominees have faced a hard road because the Democrat minority has used a “cloture rule” requiring 30 hours of debate on a nominee before a vote.

Unlike a filibuster, which allows a Senate minority to block a floor vote, cloture uses procedural tactics to prolong the confirmation process so much that it limits the number of nominees who may reach the floor for a simple majority vote.

Because only that simple majority is required to confirm a nomination, each of these six nominees was likely to be confirmed.

Here’s a look at the latest Trump nominees considered by the Senate:

Despite months of waiting due to Democrats historic obstruction, today the #Senate confirmed Patrick Pizzella, @POTUS‘ highly qualified nominee to be the Deputy Secretary of @USDOL.

“As we learned at his confirmation hearing last July, Patrick Pizzella is well qualified to be deputy secretary of labor,” Sen. Lamar Alexander, R-Tenn., chairman of the Health, Education, Labor and Pensions Committee that approved the nomination, said in a formal statement.

“America’s workers deserve a properly staffed Labor Department to help ensure workers are safe on the job and are paid the wages they’re owed as well as help ensure employers comply with our laws and regulations,” Alexander said.

Pizzella, 63, who has been acting chairman of the Federal Labor Relations Authority, will serve as lead deputy to Labor Secretary Alexander Acosta.

The Senate last confirmed him in 2001 to serve as assistant secretary of labor for administration and management under the younger Bush.

Pizzella sat on the Federal Housing Finance Board from 1990 to 1995 under the elder Bush. In that position, he oversaw the Federal Home Loan Bank system.

Under Reagan, Pizzella was administrator for management services at the Education Department. In 1988, Reagan nominated him, then recess-appointed him, as deputy undersecretary for management there.

Changing the Balance of NLRB

The five-seat National Labor Relations Board leaned Democrat through much of President Barack Obama’s administration.

Senate confirmation of Ring gives the GOP the advantage on the board in Trump’s second year in office after the lengthy 2-2 split. Ring will serve a five-year term.

Ring is a partner at the law firm of Morgan, Lewis & Bockius, where he co-leads its labor-management relations practice and leads the Washington office’s labor and employment practice group. He was board chairman of Friends of the National Zoo from 2015 to 2016.

Help for Scott Pruitt at EPA

Some of the most sweeping rollbacks of government regulations have been at the Environmental Protection Agency, but EPA Administrator Scott Pruitt has done much of the work without a No. 2.

Trump nominated Wheeler of Virginia to be the EPA’s deputy administrator in October.

Wheeler was a top aide to former Sen. James Inhofe, R-Okla., a leading skeptic of climate change. Even so, the Senate’s 53-45 vote to confirm him was slightly less partisan than the other two executive branch confirmations.

Wheeler is a principal and head of the energy and environment team at Faegre Baker Daniels Consulting, where he co-chairs the law firm’s energy and natural resources industry team.

Before joining the law firm, Wheeler worked at the Senate Environment and Public Works Committee for 14 years, in roles that included Republican staff director and chief counsel. During this time, Inhofe was chairman and ranking member of the committee.

Wheeler returns to the EPA, where he began his career as a special assistant in the toxics office.

Democrats have sought the resignation of Pruitt, whose policies liberals have targeted by questioning his travel and security expenses as well as his arrangement, in his initial time in Washington, to rent sleeping quarters for $50 a night from a friend and lawyer tied to energy interests.

Wheeler likely would be in the position of running the EPA if Pruitt’s enemies succeed in forcing him out. Given Wheeler’s background, Trump probably could count on him to continue Pruitt’s priorities.

Trump and the Judiciary

Trump has seen success in filling openings on federal appeals courts. In the latest batch, the Senate targeted seats on lower courts.

McConnell specifically talked about judicial nominations during his floor comments.

“Qualified nominees stand ready, but Senate Democrats are using the procedural playbook to obstruct and delay,” McConnell said. “In many cases, for example, they’re insisting the Senate exhaust post-cloture time even on unobjectionable district court nominees who have gone on to overwhelming confirmation votes.”

Witness the 96-1 vote Tuesday to confirm Claria Horn Boom as judge for the eastern and western districts of  Kentucky. Trump nominated her last June.

Boom, 49, has been in private practice as a partner at Frost Brown Todd in Lexington, Kentucky, and previously served as an assistant U.S. attorney in the state’s eastern and western districts.

Invoked, 94-2: cloture on Exec. Cal. #541, Rebecca Grady Jennings, of KY, to be United States District Judge for the Western District of Kentucky.

Trump tapped Rebecca Grady Jennings—confirmed Thursday by a voice vote—to be a judge for the western district of Kentucky.

Jennings, 40, has been director at the law firm Middleton Reutlinger in Louisville, where she led its litigation practice.